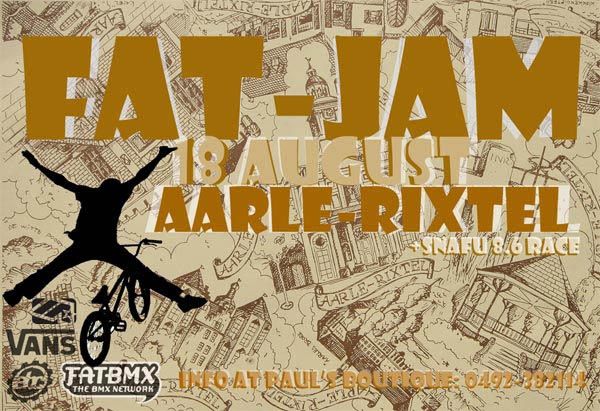 It's Saturday morning 18 August, the day of the FAT-JAM. There's not a cloud in the sky and it's going to be dry all day. The 8.6 beers have been purchased and are on ice for the Snafu 8.6 dash. McGoo's in town and ready for this.
We have FAT prizes for the Fattest slam, Fattest bike, Fattest lambal, Fattest trick, Fattest whatever.... There's a fair in town and the bars will be open till late. Paul's Boutique is only open from 11am - 1pm. This is the 19th summer FAT-JAM!!
The session on the Sugarhills starts at 1pm and the contest starts at 3pm. It will be a one hour prize festival followed by the 8.6 Snafu dash on Paul's partybike. If you feel like having a good time today, come over to Aarle-Rixtel and find the FAT-JAM.

The Sugar Hills have never looked better. The locals have put some serious work in the trails with the help of a digger and completeley overhauled the trails spot at the Valkendijk in Aarle-Rixtel. The starting hill remained the same but that's about it. As soon as you drop in there are two sets on the right with decent height and distance. This will see some good action for those riders who want to show some tricks. A left 90 degree turn is followed by a roller double and another 90 degree left turn before going into the last 6 pack that has all kind of transfer possibilities. The two lines on the left after drop in are ready to go too. The wall and "dirt spine" are still there so if you fancy that type of riding you may as well come over too. A few smaller tables are there for the kids or as a warm up for those who normally don't ride dirt.

Yes it has rained a bunch in Aarle-Rixtel too but that's perfect for the trails. There were no puddles yesterday and even if it does rain today (Friday), the trails will be ready to go. Of course on Saturday we're expecting the sun (it's on order) but we're bringing the EZ-UPs just in case (or to chill in the shade). The playground near the trails is gone so this area is reserved for those who want to barbeque.

P.S. Eastpak has also signed on as a sponsor for this year's FAT-JAM.

The 2007 FAT-JAM is around the corner and here's the latest update. It looks like this year we'll have an international field of visitors. Snafu's McGoo (USA) will be there as well as Colony's Clint Millar (Australia). We're expecting a big Belgian crew (Peter Geys, DirtE19 crew, Cools bros, Vink) and of course a strong German selection (Kujawski, Zeiss, Fastinetto..). The Dutch representation will be big as well and it looks like the weather is going to cooperate again this Saturday 18 August. We will have a dirt contest which will start at 3pm with practice from 1pm - 3pm.

It's free to enter the dirt contest and there's no cover charge.

After the dirt contest we will have the Snafu 8.6 race. It's a unique race for those who can handle an 8.6 or two.

We will have prizes available for both competitions.

We're fashionably late with this year's FAT-JAM info. In fact, if you organize a jam for the 19th year, you just turn on the automatic pilot; get your permission, hire a toilet and hope for Red Bull that they're sending a Defender so we have a decent sound. The locals have been busy shaping the new jumps. Yup, the spot has been completely modified for this year's jam. It's at the same location (Valkendijk, Aarle-Rixtel, NL) and the rules are the same (there are no rules). If you feel like having a session with some party animals, stack up your car with bikes, beers and bitches.

The sessions doesn't start before one in the afternoon leaving everyone plenty of time to get to Aarle-Rixtel. We've got a permit that allows us to make some noise between one and eight o'clock so expect some tunes (by JD Sinned) or whoever brings an i-pod with good music. 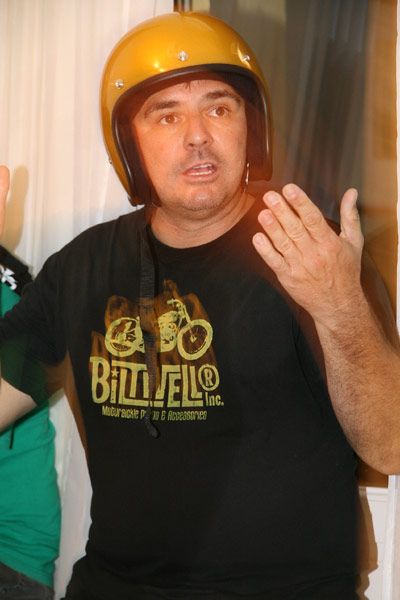 This year's special guest McGoo will be the head official in the Snafu 8.6 race. If you don't know what that entails, just come over. Good drinkers do have just enough chance for victory as great riders.

Feel free to bring your BBQ. The grocery stores are open until 5pm on Saturday 18 August so if you don't want to risk getting ill by bringing your own meat, you can buy it while you're in Aarle-Rixtel. They sell Bavaria there too.

The night program is open. Most likely we'll meet at OJA and go from there. Maybe we just stay there if the 1 Euro bottled Bavaria beers are doing their job. No cover charge anywhere.

See you in Aarle-Rixtel on Saturday 18 August.

More in this category: « Robinson Named Most Outstanding Athlete of 2007 X-Games. Receives car. Boyley Jam in Hastings, UK. »
back to top