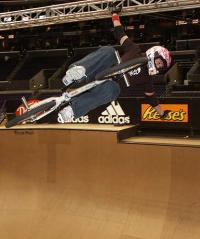 Always in the public eye, Dave was very appreciative in accepting this prestigious award stating, "Of all the awards that I've won, this is the ultimate compliment because this came from the fans." Mirra looks forward to showing the fans why he was the correct pick for the ESPY at next months X Games 11 where he hopes to add more medals to his ever growing collection. Dave is supported by his sponsors: Slim Jim, Haro Bicycles, T-Mobile, Fox Racing, DC Shoes, Oxy Acne Solutions, Bell Helmets, Dragon Optics, Maxxis Tires and Kicker.