Written by  Bart de Jong
Read 8209 times
The NBL race in Evansville saw some winners (Kyle Bennett) and some people injured (Lundy lost his kidney). We've got the results for you and also two press releases that we received from Double A marketing and Formula. 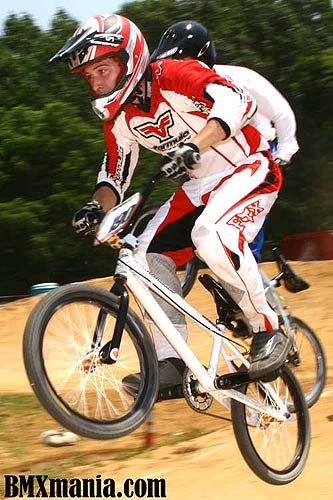 FORMULA FACTORY TEAM, MIKE LUNDY UPDATE –
Evansville, Indiana – It was a crazy, hot weekend for the Formula Factory Team this past weekend at the NBL’s Hoosier National. NBL Elite points leaders dR Donny Robinson and Amanda Geving rolled into Indiana with big targets on their backs, having dominated the points standings so far this season. Formula also had a big surprise with the return of Mike Lundy back to the race scene after a four month hiatus. Nearly everyone in the BMX community has heard about Mike Lundy’s serious accident at Evansville. Mike was flying in the first two A Pro motos and had low points going into round three. He decided to take it easy going into turn one and went down hard after making contact with another rider. Mike has no recollection of what exactly happened, but the next thing he knew he was down in turn one. After consulting the EMT’s, he went back to his pit area and found that he was urinating blood, which he was warned could be a sign of internal bleeding. Mike promptly drove himself to the hospital and the staff there quickly determined that his kidney was broken into six different pieces. He was immediately ushered into surgery and the kidney was removed. Mike is currently recovering in the Evansville hospital and should be released later this week. Lundy has been conspicuously absent from the race scene in ’06. Mike had been living in Las Vegas, after moving there from Illinois last year, but decided to move back home after the NBL’s Boulder Dam National in February and take a break from racing while he figured out what his next move was. Recently, Mike got the racing bug again and decided make his comeback at the ABA Rockford race this weekend, but at the last minute decided to give Evansville a try. The rest they say is history.

Mike is still planning to move to San Diego at the end of summer and we’ll have to see about his return to the BMX track. Any well wishers should contact Mike at This email address is being protected from spambots. You need JavaScript enabled to view it. or mail to: Mike Lundy c/o Formula Bicycle Company 771 Jamacha Rd #272 El Cajon, CA 92019

Donny Robinson came into Evansville with the Elite Men’s points lead, but still well aware that this is not a class the he can just run away with. Donny rocked on his Formula Solution Pro, doubling in Elite Open and a 6th and a 4th in Elite Men’s. Here’s Donny in his own words: “Well, the weekend didn't go as well as it should have. Jason Rogers and I had been on a two week clinic road tour since the ABA Lake Perris race. I felt real good and had a lot of fun but I didn't place like I should have in either of the Elite mains. On Saturday, I had gate 8 with stumpy in 7. The outside at Evansville is tough enough, let alone having Stumpy next to you. I got out decent but not enough to get over on Stumpy and just got stuck on the outside and couldn't pass around the rest of the track and I ended up in 6th. Sunday, I was feeling better than Saturday, but I unclipped while coming around on my third pedal so I started the main out in last. I moved up into the lead pack but could only stretch for a 4th. The good news is I doubled in Elite Open. Saturday, I got the gate I should have got in class and I took 1st. Sunday was a repeat and I again took 1st. But unfortunately, you don’t get points for open. All I can say is the race for the title is heatin up!”

Amanda Geving also strode into Evansville with a points lead of her own, in the Elite Women’s class. Evansville’s fast downhill track appeals to Geving and she made the best of it, battling with Kim Hayashi all weekend. On Saturday, she was in second behind Hayashi, but couldn’t find a way around her and had to settle for second. Sunday was a different story as Geving grabbed yet another Elite Women’s victory for the season. Next up is the ABA MidWest Nationals in Rockford, Illinois this weekend then the NBL’s Stars and Stripes National in South Park, Pennsylvania. Then it’s off to the UCI Worlds in Sao Paulo, Brazil for the entire Formula Factory team (minus Mike Lundy) of dR Donny Robinson, Amanda Geving, Warren McDow, and Chad Kerley.

Round 7 of the 2006 NBL Pro tour was held this past weekend at the Evansville BMX track. This NBL classic super fast, super tech track has held a lot of NBL national events in its 20 plus years of operation, and this years event may have had some of the most exciting Pro racing to date. Here is how Kyle Bennett and Randy Stumpfhauser finished up the weekend:

Kyle Bennett had another weekend that had the fans talking and will keep them talking all summer long. Kyle won the 3 biggest events of the weekend. Day 1, Kyle smoked the competition in the Elite men's class, taking home another huge NBL Elite win. On Sunday, Kyle once again holeshotted the Elite main event, adding another Sun Ringle Hole shot award to his collection, on is way to win another Elite men's main event. With these 2 wins, Kyle should be in the lead of the NBL Pro Points title chase. Kyle will go into the last 2 events of the NBL season looking to keep the lead and take home another NBL #1 Pro title.

Randy Stumpfhauser had a rough weekend in Evansville, but by watching him in the moto's both days, you would have thought he would be in the running for at least one win on the weekend. On Saturday, Randy was in both the Elite men's main event and Elite open. Outside lanes hindered the main event overall results for Randy, as he finished up 5th in both main events. On Sunday, things went south for Randy, as he only raced Elite men and missed out on the main event. Look for Stumpy to rebound at next weekends ABA national event in Rockford, IL.