Written by  Bart de Jong
Read 12419 times
Arcadia, California – As with most countries today in lieu of the World Championships in Brazil and the 2008 Olympics, the country of Chile in South America has made the move to step up their BMX program. Although Chile has a long history of BMX racing in numerous World Championships and has its share of World Champion riders, Chile is serious about showing the world that they can compete with the best! The Chilean BMX Federation (or FCBX – Federacion Chilean Bicicross) has recently restructured itself and put new people in charge of moving Chilean BMX in the right direction. 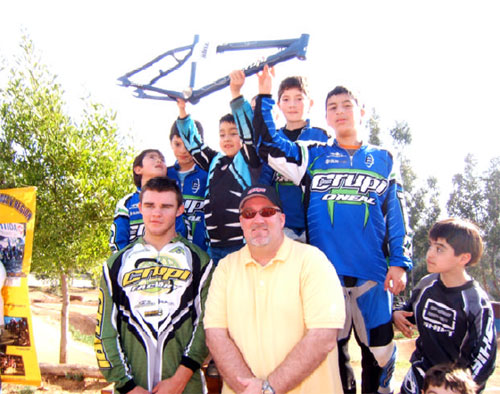 FCBX President Patricio Vasquez has appointed Hernan Godoy Flores as the Chilean National Team Manager (who is also the Chilean Crupi Team Mgr). Hernan along with other new FCBX board member Arnoldo Aguirre decided that what they needed was to give the Chilean riders a well needed shot in the arm by bringing down a top US Pro rider who could run some clinics and show the riders some advanced training techniques. In addition, they wanted someone to instruct both the Federation members and several of the parents involved on the importance of better equipment for the riders and the proper techniques for sizing the riders. This was a perfect match for Crupi as Crupi’s AA Pro Mike Moeller runs his own clinics here in the states and Crupi’s Greg Swingrover could handle the rest. This was a historical first for Chile as it was the first time ever having an American Pro running clinics in Chile!

Mike and Greg flew down to Santiago, Chile and spent 2 weeks traveling the country to a few of Chile’s largest cities with BMX tracks. The first stop on the trip was the city of Osorno in the South of Chile. Since it is now winter in Chile, it was cold and wet but Mike ran 2 straight days of clinics with great turnouts each day. Crupi wants to thank Anita Luegmayer and her family for their help with the clinics and for showing Mike and Greg all the beautiful areas surrounding Osorno.

Stop number 2 was back to Santiago for clinics at the San Bernardo track. San Bernardo was a great track with lots of technical sections. Track Director Jorge had the track in tip top condition for the clinics and the turnout was spectacular! Again, Mike ran 2 straight days of clinics but changed it up a bit in San Bernardo. There are 2 distinct groups of riders in the Santiago area, the younger beginning riders and the older more skilled riders. Mike broke the group in half and worked on the basics with the younger riders. Then for the older and more skilled riders, he not only worked on some areas of the track but decided to talk with them about what has worked for Mike and helped to make him successful in the United States. This seemed to work very well with the older riders and made the clinics feel more complete.

The 3rd and final stop was in the beautiful coastal city of Vina Del Mar. The track is located in the hills surrounding Vina Del Mar and has a terrific view of the beach and the Pacific Coast. Not only was this track in one of the most beautiful locations they had ever seen, but it was a downhill track making it fast and fun! Once again, Mike ran his clinics for 2 straight days keeping his new format for the older and younger riders. At the end of each clinic in each city, Mike gave out stickers and Crupi/Mike Moeller posters that he autographed for the riders and then gave each rider a free Crupi Part they could use on their bikes. Each day of the clinics while Mike was instructing, Greg worked with several of the parents and their kids to give them tips about proper sizing of the bicycles and discussed the importance of a proper sized bicycle. In addition, in the cities of Osorno and Vina Del Mar, Greg gave Power Point presentations for the families and some local business owners interested in sponsoring teams in Chile. These presentations sparked a lot of interest and a lot of questions. All in all, the presentations were a great success!

On the final day and with the help of the FCBX, Crupi had a special Crupi Cup race where anyone who attended the clinics could come and race for free. Winners were given special Crupi prizes and Crupi even raffled off a new Crupi frame! Everyone was anxious to see Mike race against the top Pro riders from Chile including one of Chiles best and Vina Del Mar local Felipe Faúndez. This would be Mike’s first race back since his surgery and although Mike was not 100%, Mike felt like he was good to go. Mikes knee didn’t seem to give him any trouble on race day but the 2-weeks of running clinics, eating different food and being away from home seemed to all hit Mike on the race day. Mike looked strong in his first 2 motos but after his 3rd moto, he felt terrible and threw up behind a big tree.

Everyone was very supportive of Mike and understood that he was not at his best. Although everyone told Mike that he didn’t have to finish the race, Mike managed to get into the gate for his ¼ final so he could transfer to the main. They gave Mike a little time to rest before the main so the FCBX President Patricio Vasquez could present both Mike and Greg with tokens of their appreciation for coming down to Chile and working with their riders. When that was finished, they announced each Pro in the main event. As the riders started rolling out to the first jump as their name was announced, Mike noticed that his front tire was flat. Mike thought to himself what else could go wrong? Jorge from San Bernardo quickly helped to put someone else’s front wheel on Mike’s bike so he could race. When the gate dropped, Mike was out quickly and looked great going into the first turn. However, with a different front wheel and tire on his bike, the front end began to wash out making him hit the brakes and letting Felipe pass him. Mike tried to catch back up but just couldn’t pass Felipe so Mike ended up taking 2nd place. Everyone was happy for both Mike and Felipe Faúndez who rode a great race and deservingly took 1st place! Mike with Felipe Faúndez & his brother after the race in Vina Del Mar Greg and Mike flew home the very next day but will always remember the time they spent in Chile. The world should know that after the Chilean riders get themselves to other countries and practice racing against more top riders and experience different tracks, the country of Chile will have riders to contend with in the near future! The people of Chile were what made the trip very special to both Greg and Mike and they now have new friends for life that they will see at future World Championship races.

Both Greg and Mike want to send out a special thank you to the 2 families who really took care of them and showed them what the people of Chile are all about: The Godoy family, Hernan, Prissylla, Felipe, Benjamin and Martin; and the Aguirre family, Arnoldo, Livia, Elias, Diego and Ania. Thanks for taking such great care of us! Mike exchanges jerseys with the Aguirre family and the Godoy’s