Written by  Bart de Jong
Read 5293 times
The 2006 ABA season is now done and once again TEAM REDLINE riders have taken home their share of No.1 titles and plates. In an extremely exciting three main showdown, both JASON CARNE$ and BUBBA HARRIS defended their Championships for the year. Here is the second part of Redline’s GRANDS Race report – featuring the successful Vet Pro who puts in more driving miles in a single year than any other Pro out there.
VET PRO: After his win at the Friday night Pro Spectacular, Redline's JASON CARNE$ boosted his points spread within 80 points of leader Todd Parry. (For those new to BMX, 80 points is the difference between each finish.) If it had been a 79 points difference, it would've come down to whoever-beats-who. But as it played out, Jason would still have to get one-place between he and his arch nemsis, in order to keep that No.1 plate that has been dangling from If “T.P.” were to keep right behind our Redline hero, they would wind up tied in points, and the ABA tiebreaker rule would go to the person with the most wins. And due to Carne$' early-season knee surgery, Parry came in to Tulsa with the most stands atop the podium. But just as Eric Rupe did in the late 90’s (earning 6 in a row), Jason has gotten mighty used to the single digit plate, and was ready to fight tooth and nail to hold on to it. So on Sunday afternoon – November 26th, the first of three pro mains lined up on the 8-man grid, with both contenders in the big show, and rarin’ to go.

In main No.1, Carne$ took a close 2nd place behind virtual underdog Paul Caldwell, while Parry was squeezed to mid-pack. Things looked good for Carne$ at this point. But it was main No.2 where the excitement really began!

As Jason and T.P. both entered the first turn side-by-side, the Utah rider put the lean on the Texan. Carne$ was diving hard to get an elbow out front, but the Socko pro was living up to his title-sponsor. It was a crazy move and Jason was inches from eating a haybale ... when suddenly …. KA-BLAMMMM! They BOTH went down in turn one, taking a few other guys with 'em. It looked as if T.P. got buried or tangled in the “CarneAge” (pun intended), while Jason jumped to his feet quickly and grabbed his golden Proline to get back in hot pursuit of fourth place.

Things were lookin' better for Carne$ ... but still anything could happen. Going in to the third main, Carne$ sat comfortably with 6 points while T.P. was loaded with more points than anybody wants to count when you're up for a National title. A third-main win for the Redline’s defending Champ was just enough to put the icing on Carne$’s cake - giving him the Grands overall win as well as his fifth consecutive No.1 Vet Pro title.

In his acceptance speech, Jason was his typical humorous self, bringing to the stage a bottle of champagne. “I don’t know what the rules are on this…” he said to ABA President Clayton John and the crowd, “but I’m old enough.” And with that, he popped the top, gave a mediocre attempt at spraying down the front row of photographers, and chugged it down in true Norba [and/or Nascar] podium style. …

The 2006 ABA Grands was once again a great weekend for TEAM REDLINE. We added two more silver Cups to the collection, two more National No.1 plates to the back door of the Redline trailer, and one more NAG No.1 plate to the right-side door - thanks to Denzel Stein. Redline also went away with two Grands Pro wins (out of possible 4) .. and even turned in a medium-high team score considering the Sheet had 3 Ams and 3 Pros on it. 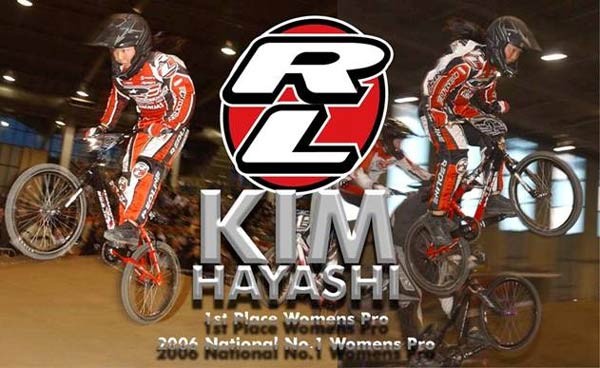 With the 2006 BMX season now thru, TEAM REDLINE riders have displayed their dominance by bringing home No.1 titles and plates – in this future Olympic sport. Not only did both JASON CARNE$ and BUBBA HARRIS defend their No.1 Pro titles, but KIM HAYASHI topped off the Tulsa event by nabbing her first Grands Victory in the Pro Women ranks. WOMENS PRO: For the past four years, Kim Hayashi has experienced nothing but bad luck when visiting Tulsa. She’s had a first-main monkey on her back that she thought would never hop off – always crashing in the first or second main. Always in contention, yet always falling (literally) a little short (also, literally). But this year was completely different for the 6 year veteran of Team Redline. Lil' Kim wasn’t high enough in points to even be considered a title-contender, and Las Vegas bookies would likely have put her down as a 8-to1 longshot. Amazingly though, the lack of pressure in chasing down a No.1 plate, backed up by some hardcore pre-Grands training with her new coach in Santa Barbara, made for a dramatic difference in Kim’s racing. She felt free. She felt super strong. She felt relaxed. And most importantly, she was HAVING FUN.

In the first main, the 4’ 10” wonder-girl took a very close 2nd place, and was smiling ear-to-ear in the Redline pits because she’d just broken her “first-main” crash-streak.

“I felt like just pulling over in the rhythm section and raising my arms in victory, because that was the furthest I’d ever gotten in an ABA Grands first main,” she joked afterwards.

But what about the ABA Womens Pro title, you ask? Would a victory be enough for Kim to get the No.1 plate?! Where did No.1 and No.2 seeded Alise Post and Arielle Martin place? Were they far enough back?

Surprisingly, Arielle Martin was back in the pack after a first main pile-up, and even more shocking, Alise Post was pushing hard to just podium. Until they announced the winner of the Cup, half of the crowd, it seemed, thought that Kim might’ve taken the title – including Kim herself. She rode up to the scoring table and asked where the victory put her in the overall standings. And you could tell by her face what the answer was...

That was the amount that Lil’ Kim lost The Championship to … and the new No.1 Pro Girl in the ABA went to Rookie Pro of the Year Alise Post. At 15, Alise is the youngest girl to ever get the title, as well as being the first girl to ever own Silver Cups in all three female classifications (Girl, Gilr Cruiser and now Girl Pro.) As it went, if Kim had won the Friday ROC, or even finished one place better any time during the season – she would’ve finally taken the one title that continues to elude her.

Without question, Minnesota’s "Beast" is going to have to contend with a more confident Kim Hayashi next year, who has [at least for now] erased the “Krashin’” moniker from her nickname, and now knows what it takes to win the Greatest Race on Earth.his bars for the past four years.

More in this category: « Bubba Harris wins three in a row News from the ABA. Details on the 2006 ABA Grands »
back to top