Written by  Bart de Jong
Read 6246 times
The ABA kicked things off huge this past weekend, as the ABA crew outdid themselves with one of the best race tracks ever built at the Reno Livestock arena for the 2007 Pro Series opener. With 25 of the worlds top AA Pros in attendance, the Silver Dollar Nationals was a great weekend of exciting Pro racing and has set the stage for what should be the best year of AA Pro racing in the ABA's history. Randy Stumpfhauser, Brandon Meadows, and Cristian Becerine were all in attendance for the event and here is how they finished up: 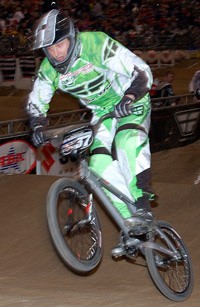 Brandon Meadows made a huge impression in Reno. First off, it was Brandon's first race for his new sponsor Intense BMX/Socko Energy. Brandon was so excited about his new sponsorship, that he raced on Friday night at the ABA National Pre race, taking home the win. On Saturday, Brandon kept things going as he impressed the Nor Cal fans all day and made both the AA Pro and Pro Open main events. Brandon would finish up 3rd in Pro Open and 5th in AA. Brandon is excited about 2007 and looks forward to a healthy year of racing. Brandon's Sponsors include Intense BMX, Socko Energy, SINZ Racing, THE Products, Fly Racing, Shimano, Power Bar, Intense Tire Systems, Cyto Sport, OGIO, Thomson Seat Posts, and BMXpros.com

Randy Stumpfhauser started off the 2007 ABA race season with a continuance of his recent domination. On Saturday, Randy was out front all day and easily made it to the AA Pro Main event. Once the main event kicked off the 2 main events, it seemed Randy was off his A game just a bit, as he would finish up 8th for the day. On Sunday, Randy was back and ready to redeem himself. 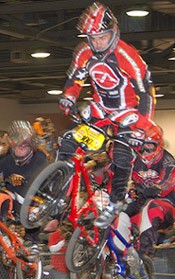 Cristian Becerine was the sole rider for the Free Agent world team in attendance in Reno, but his performance made up for the lack of team mates. On Saturday, Cristian was one of the fastest Pros on the track but a crash directly behind him caused him to crash and miss out of the AA main on Saturday. He was in the Pro Open main event, where he would finish up 4th. On Sunday, Cristian was in both the AA and Pro open main events. In AA, Cristian finished up 4th, and in Pro Open he powered his way to an impressive 2nd place. Cristian's Sponsors include: Free Agent, Answer, Kenda, THE Products, Sun Ringle, Shimano, Powerbar, Cyto Sport, OGIO, Thomson Seat Posts and BMXpros.com

By: Pete D/Double A Marketing

The Intense BMX Pro Team is proud to announce the addition of Socko Energy Drinks for 2007 and 2008. Danny Caluag and Brandon Meadows will be decked out in the all new Intense/Socko Green Jerseys and Fly Race Pants for the rest of the season. Socko Energy Drinks had entered into the BMX market last season with supporting a few riders, including Vet Pros Todd Parry and Mike Gul, and now have signed on as a title sponsor for the Intense BMX Pro team. Socko has already made a commitment to BMX and now with the signing of the Intense Pro team, we all know they are here to stay.

The Intense BMX / Socko Energy Pro team kicked things off in a huge way this past weekend at the ABA season opener in Reno, Nevada.

Danny Caluag must have loaded up with Socko before the AA Pro Mains both days, as he took the overall AA Pro win each day. Danny also won Pro Cruiser on Saturday and finished up 3rd on Sunday. Danny has already impressed many with his 2 huge wins at the NBL X-Mas Classic and now the ABA fans got to see Danny win AA Pro, both days, first hand. Danny quoted that the whole fit and feel of the new team has help improve his on track performance and he is very excited about the 2007 racing season with teammate Brandon Meadows.

Brandon Meadows was so excited about his first race for Intense/Socko that he raced the Friday night pre race. Brandon wound up taking the win on Friday night and carried over that momentum on Saturday with easily making both the AA and Pro Open main events. Brandon finished 5th in AA Pro and 3rd in Pro Open. Brandon looks forward to a full season of racing and is excited to have a teammate for the first time in years.

Look for the riders to do a full season or racing at all the ABA and NBL Pro Series events, as well as the UCI Super Cross series, North American UCI events, and the World Championships.

More in this category: « MIKE DAY SIGNS WITH GT BICYCLES! Dubois joins MBK. Team is now complete for 2007 »
back to top