Matt, Tony and Rachel will rely on the refreshing, caffeinated taste of BAWLS Guarana as they race their way to an NBL championship! 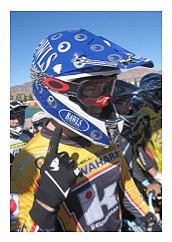 “BAWLS Guarana is thrilled to sponsor Matt, Rachel and Tony for our first BMX season,” said CEO Hoby Buppert. “They have been racing for a long time and continue to get better every year. We are definitely proud that they will wear our colors!”

Matt is an Elite rider from Ohio and has been a part of the sport for the past 19 years. He first began racing through the influence of the older, “cool” kids in his neighborhood and is currently ranked among the top five in the NBL Elite “I’m really excited to ride for BAWLS Guarana,” said Pohlkamp. “BAWLS took the initiative to sponsor the NBL and it’s awesome to receive the support for the sport that we love.”

Rachel, currently ranked third among the NBL Elite, is another Ohio-based BMX veteran who started racing at age 3. Rachel also supports the growth of BMX racing by hosting clinics for new riders in her area. “Thanks to BAWLS Guarana, I now have a great tasting energy drink every time I step off the track,” said Smith. “I am psyched that they are supporting the NBL and are willing to share their product throughout the national series.”

Tony, a native of Orlando, Fla., has been racing for more than 20 years and began his career in racing through the influence of his friends. As an amateur, he is currently ranked 2nd on his 35 and over Expert class and 1st on his 35-39 Cruiser class. Tony is a two-time President’s Cup Champion and is now working to earn a world title rank. “I wanted BAWLS as my sponsor because the BAWLS team is great and they just want to have fun. That’s what it should be all about,” said Lehman.

Under their sponsorships, Matt, Tony and Rachel will stay energized with unlimited access to BAWLS Guarana products – so be sure to catch them speeding down the track! They will also represent their favorite energy drink in style with exclusive, custom BAWLS Guarana helmets painted by DB Customs. The blue and chrome helmets, unveiled last week at the Lake Mead Nationals, are painted to resemble a BAWLS Guarana can.

As the Official Energy Drink of the NBL, BAWLS Guarana has exclusive sampling and track signage rights at all NBL-sanctioned national races for 2007. The brand will also launch a cooperative marketing effort with the NBL through a limited edition run of BAWLS Guarana CompUSA packaging dedicated to BMX racing, as well as a nationwide contest, set to launch in April.

More in this category: « Madrid will celebrate BMX Supercross World Cup in Juan Carlos I Auditory the 13th and 14th of April. NBL Check Point Chase »
back to top