1st Flips EVER in a BMX Race. The Todd Lyons Diary 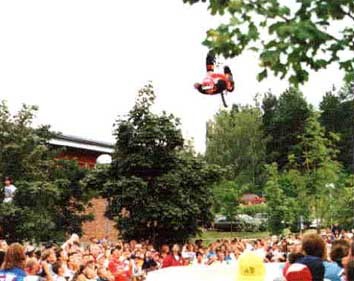 I started keeping a daily journal in 1987 when I was only 15 years old. Since then, every single day of my life has been documented in these journals. Looking back over the years, here is a notable journal entry and also my comments looking back now.
1st Flips EVER in a BMX Race October 24th, 1993

Actual Journal Entry
“ABA Fall Nationals –Burbank CA AA Pro motos 4-4-3 I didn’t make the main. I flipped the pro jump in my 1st & 3rd motos. EVERYONE went crazy. I got balled up in the semi & didn’t qualify to the main.
Pro Open motos 6-3-6 I didn’t make the main. I did flips in the 2nd & 3rd motos. There were crazy good races to watch. Cara & her roommate came & watched for an hour. Later I talked to some of other girl & got her number. She’s from San Diego though. Went to the P.O.W. house with Dave Clymer after the races & a bunch of people were over there. Cara came and met me over there later.”

Looking Back Now
If there is one thing that I had to pinpoint in my BMX career that really made me who I am in the BMX world, it would have to be being the “First rider to ever do a backflip in a race.” Back then, it was a really, really big deal. Most people had never seen anyone do a flip on a bike. Actaully, I can pretty much guarantee that 99.99% of them had never seen anyone do a flip at all before this weekend. Remember, this was 14 years ago.

What’s funny is that this was the first time I ever did them in a race & I did them in 4 out of my 6 motos! I don’t think that I made any mains that weekend, but I will never forget that race.

How shady was I back in the day? The girl who I was dating at the time came out to the race. And after she left, I was swoopin’ on another chick! Shady, shady. I seemed bummed that she lived in San Diego. That’s probably because I didn’t own a car back in these days.

Photo: This photo obviously wasn’t from the race, but it was from that same year in 1993. That’s a pretty high flip for just learning them a few months earlier. This pic was from a jump contest at a race in Stockholm, Sweden.

More in this category: « ABA Olympic BMX Training Track Opens in Salt Lake City, UT. DC and SE Racing join to celebrate the legendary history of the P.K. Ripper »
back to top