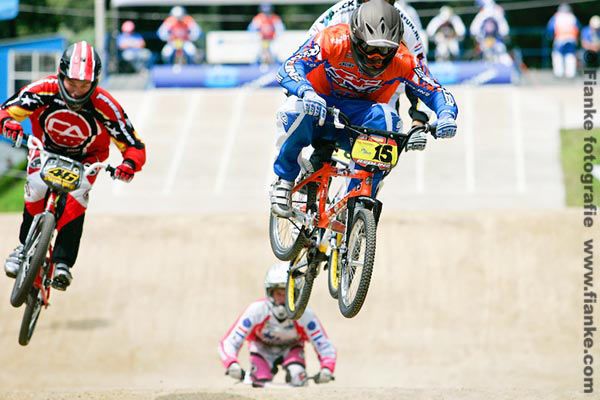 The World BMX Championships cycling competition scheduled for July 26-29 in Victoria will feature more than 2,000 riders from 39 countries. The competition promises to be a sneak preview for the event’s Olympic debut next year in Beijing. The 2007 worlds is a big points producer for the international rankings therefore the best in the event are expected to compete. ‘’The medal hopefuls for Victoria will be the same medal hopefuls for Beijing,’’ said Marischal De Armond, the BMX Worlds General Manager.
Defending champions Javier Colombo of Argentina and Willy Kanis of the Netherlands are in Victoria to defend their titles. Michael Day of the U.S., runner-up in 2005 and 2006 is Colombo’s biggest threat in men’s competition. Willy can expect a tough challenge from Gabriela Diaz of Argentina in the women’s race. Diaz won the world title in 2001, 2002 and 2004 and was runner-up last year.

Samantha Cools of Alberta is Canada’s top medal threat and is currently ranked fifth in the world. She is fully recovered from a concussion suffered at the national championships a month ago in Bromont, Que. At last year’s worlds, her chain broke right at the start. ‘’It was very disappointing,’’ she recalled.

Christine Miller of Alberta and Danielle Brisson of B.C., are other Canadian entries in the women’s elite competition. Headlining the men’s elite team are Scott Erwood and Nick Goertzen of B.C., and Patrick Lebel of Alberta.

Competition starts Thursday with the opening races in the Challenge Category. The Elite races are scheduled for Saturday.

More in this category: « FACTORY FORMULA ROLLS THE DICE IN VEGAS, COMES UP BIG Bawls and Shimano team up »
back to top