Redline report of the ABA Grands 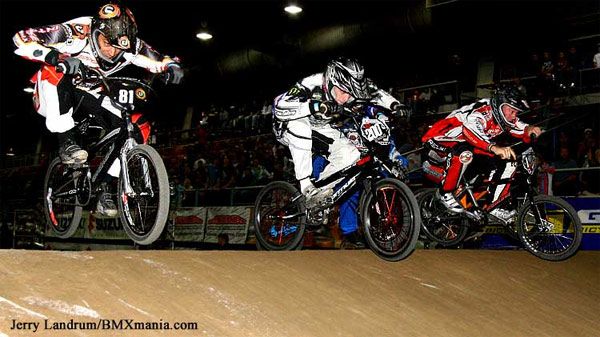 ANOTHER GREAT GRANDS FOR TEAM REDLINE:
· GOLDEN CRANK AWARD FOR TEAM OF THE YEAR
· GOLDEN CRANK AWARD FOR PRO OF THE YEAR: BUBBA
· NAG-5 CHALLENGE VICTORY FOR DENZEL STEIN
· NATIONAL NO.1 VET PRO TITLE FOR JASON CARNE$
· 16X WIN FOR DENZEL; EARNING HIM ANOTHER NAG NO.1 PLATE AND NATL. NO.2
Despite not having BUBBA HARRIS in the hunt for a fourth No.1 Pro plate, the ‘07 ABA GRANDS was still another great one for the red, white and black. Coming in to Tulsa’s Thanksgiving tradition, JASON CARNE$ was up for a record-tying 6th consecutive No.1 Vet Pro title, and the 16 year old DeSoto powerhouse DENZEL STEIN was again within grasp of the illustrious No.1 Amateur plate. Also, DAKOTA SENGER and ANTHONY DeROSA were both out to nab a NAG No.1 plate for the year.

WEDNESDAY: As always, the 5 days of action-packed BMXin’ began in the banquet hall with BMX Hall of Fame inductions and Golden Crank Awards. For starters, two more past REDLINE legends made it in to the Hall of Fame; DENNIS DAIN and GREG GRUBBS. Both of these guys helped put Redline on the map in the 70’s and 80’s. They are true ambassadors to the sport and it was great to see them recognized for their early contributions to the sport of BMX.

Next came the Golden Cranks; voted on by our peers - the ABA membership. For TEAM of the YEAR, Redline’s small 6-rider squad took the gold Crank trophy for the second time ever. And for PRO of the YEAR; it was the guy who puts in more time on a BMX track doing BMX Clinics than any other AA-pro - BUBBA HARRIS. The Grands was Bubba’s first race back since his foot-injury in Beijing, and being handed his fifth Golden Crank was a nice way to welcome him back to the circuit. We’d like to thank all of those who voted for Redline and Bubba! Winning this award means as much to us as a No.1 title, since it is voted on by the riders and fans. …

THURSDAY: Practice day with time in between to hit up Subway for a turkey sub (no mayo, please). …

FRIDAY: Throughout Friday was the ROC (Race of Champions), and Redline riders and bikes were out front aplenty. Among the standouts would be Oregon’s determined one; DAKOTA “The ROBOT” SENGER. A “double,” with wins in both 11x and 11cruiser, was a good way to start off the long weekend of highspeed thrills and spills. Following up Dakota was ANTHONY DeROSA, with a 2nd in 12cruiser and an impressive 12x victory. Those three red-background No.1 plates will look pretty sweet on their new hightech ’08 Flight bikes. Oh; we can’t forget our supercharged Japanese import MASA SAMPEI, who scored himself a 3rd in 17-20 cruiser. … 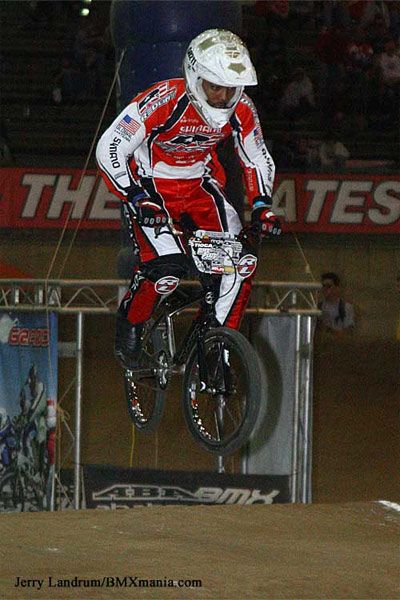 FRIDAY NIGHT: The annual Pro Spectacular and NAG Challenge takes place immediately after the ROC; where the qualified Pros from the day move on to the big ticket finale. To our delight, JASON CARNE$ was in the final. But to our disappointment, he placed 8th after a tangle-up in the 1-lap main. But the big story here was DENZEL STEIN; who was the crowd favorite in the special invitational Amateur challenge. Denzel was pumped for this race and proved his point by winning it by nearly half a straightaway! Up for the prizes was a Redline road bike, the carbon-fiber rear’ed R-760 (msrp: $1,200) … and coincidentally, it just so happened to be in Denzel’s size. …

SATURDAY: First round of motos went well for the entire Redline team with 90% of the guys qualifying out. Plenty of time to sign autographs, check out the huge ABA Vendor row, or just chill out in the plush Redline pits with friends, family and teammates. … 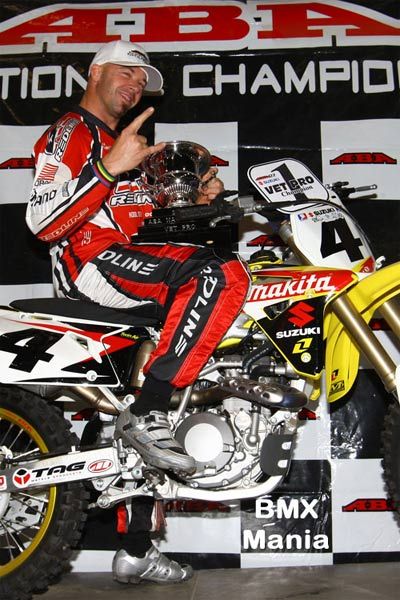 SUNDAY: It’s the BIG day that everyone has been waiting 11 months for; where ABA’s eight National Championships are decided in the main events. In the Redline camp this year, our chances for some big silver cups were in the Vet Pro (Carne$) and Amateur (Denzel) title chases, with a slim longshot for No.1 Cruiser (Senger & DeRosa). Already with 5 Vet Pro titles under his weight belt, JASON CARNE$ had his work cut out to win a record-tying 6-in-a-row title. In ABA history, only Eric Rupe had been able to dominate for more than half a decade. And with new Vets John Whipperman, Greg Romero and Dale Holmes joining the class this year, Jason and his Flight Pro XL have been putting in overtime to make podiums, score wins and remain in the points chase. After 11 months of racing, it would all came down to these final three mains Sunday evening. For those who know Carne$, he doesn’t give up easy. With the very No.1 plate that he has zip-tied to his bars for the past 5 years on the line, he handled the pressure like the Champ he is, and against all odds, held on to it with a crazy 3rd main win. Miraculously, “The Horny Toad” made it 6 in a row!

In the Amateur chase, the 16 Expert class was low in rider-count; compared to 17-18 and 19-27 Expert. To get the No.1 Am title, Denzel would need two things to happen: First, he MUST win his main. And secondly, something drastic would have to happen to the top dogs in those larger age divisions.

Only one of those things Denzel could control; and that was winning the 16x main. He did just that, as if it were an encore performance from Friday night’s NAG Challenge. From there, it’s just crossing your fingers, hoping and praying for luck to come your way, and sweatin’ it out. There was a glimmer of hope as the Amatuer points leader failed to make it to the 19-27x finale’. And it looked as if the only rider standing in the way of Denzel and the silver Cup was Phantom~OnTrac’s Nic Long in 17-18x. And in the 8-man main with Long was Redline’s top Japanese superstar, Masa Sampei. Could Masa be the hiro; and keep the win way from Long, while simultaneously giving Denzel the title? It would’ve been a great story if he had, but just like Denzel was in 16x, Long was unbeatable this weekend. And so, once again, for the second year in a row, DENZEL STEIN will strap a National No.2 plate to his Redline Bubba Harris bars. Or, when he feels like it, he can run the familiar grey-background NAG No.1 plate that he has earned now for three years straight. …

With one silver Cup, a Nag Challenge win, two Golden Crank awards, and a rack full of Grands podium finishes - all in all, it was a great way for Team REDLINE to wrap up the ’07 BMX season. We would like to congratulate the many riders who made their mains on a Redline bike, and virtually high-five those who podium’ed in Tulsa on a Proline or Flight bike.