Bubba's Out for the Olympic Trials in Chula Vista today 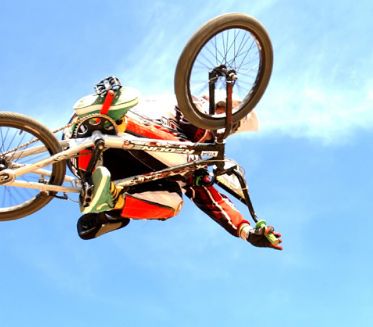 As the result of a recently sustained injury, U.S. Olympic Team hopeful Bubba Harris (Goodyear, Ariz.) has withdrawn from Saturday's 2008 U.S. Olympic Team Trials for Cycling (BMX). Harris sustained the injury while practicing during a training session on Thursday. He issued the following statement:

"While preparing for the Olympic Trials on Thursday, I was giving it my all, as usual, when I crashed on the second straightaway. As a result of the injury that was sustained, I've decided to withdraw from Saturday's competition. Although I'm disappointed that I won't be
competing in the Olympic Qualifying race, I look forward to returning to action as soon as possible and once again putting 100% of my effort into training and racing. I'd like to wish the remaining competitors good luck on Saturday and I'm sorry I won't be joining them in pursuit of a spot on the 2008 U.S. Olympic Team."
Tweet

More in this category: « UCI Announces Qualifying places for BMX Event awarded for the 2008 Beijing Olympic Games Mike Day Qualifies for Beijing Olympics »
back to top