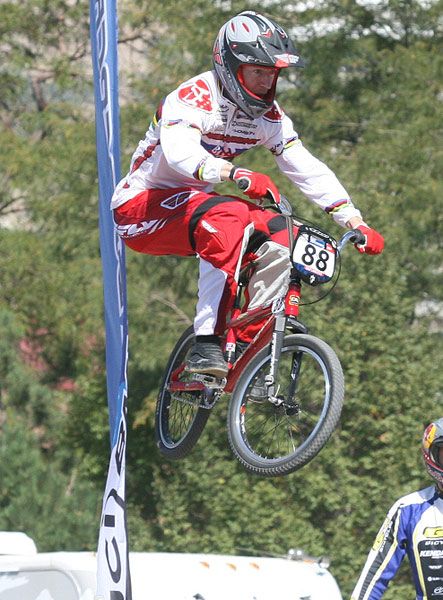 Round #6 of the 2008 NBL and ABA Pro Series events were held this past weekend in Prunedale, California for the NBL and Atlanta, Georgia for the ABA. With one of the few conflicting ABA and NBL national Events of the season, the Pros of BMX had to make the decision on which series to attend. A larger turnout was at the NBL event, but the ABA event was just as difficult with the level of riders in attendance. With Pros on each side of the USA racing this past weekend, it made for 2 great events. Here is how the Pros finished up:

Kyle Bennett, one of the 3 rider Team USA's BMX Olympic Team, has been on a tear in the NBL with a slew of great results. Prunedale was no exception, as he looked to be one of the fastest riders during the qualifiers on Saturday. The NBL one main event format worked out great for Kyle as he took the win wire to wire on Saturday. Sunday started out a little different for Kyle as a first moto crash
made it a little bit tougher for him to transfer out to he main event. Kyle turned it up and made his way into the main event, and when the gate dropped, he was once again gone and took the win. Kyle's Sponsors include Free Agent, FLY Racing, UGP, Shimano, GO211.com, Bombshell, Sun Ringle, Kenda, Thomson, KHS, S & M bars, Cyto Sport, and ORP. 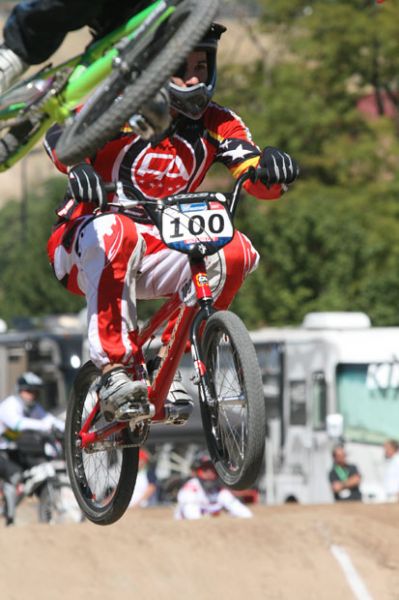 Cristian Becerine is having another great NBL season and Prunedale chalked up 2 more great results. On Saturday, Cristian easily made his way into the main event and looked to be a threat for the Podium, but a photo finish would show him just missing out and finishing 4th. On Sunday, Cristian came back and wanted to win it all. He almost did, with an impressive 2nd place finish. Cristian looks toward the South park NBL National next weekend. Cristian's sponsors include Free Agent, KHS, Fly Racing, SINZ, Kenda, THE Products, ODI, Sun Ringle, Shimano, Cyto Sport, S & M bars, OGIO, Thomson, and BMXpros.com

Randy Stumpfhauser has always been a force to recon with at Prunedale and 2008 was no different. Randy was in the Elite men's main event both days, but unfortunately was unable to get on the podium either day. On Saturday, Randy was in the main and just missed out with a 5th place finish that was a tight as it gets in Elite men. On Sunday, Randy finished up 8th but rode the entire day like he was up for the win. Either Way, Randy holds a slight lead in the NBL pro points chase and also looks forward to South Park. Randy's sponsors include GT Bicycles, Bombshell, ODI, Tangent, Fly Racing, Sinz, Shimano, GO211.com, OGIO, Cyto Sport, SDG, Toolshed, Sharp, and BMXPros.com

Danny Caluag was the lone Double A marketing rider to attend the ABA event. He has won at least one day of ever ABA National he has attended this year and the Dixieland nationals gave Danny 2 more shots to win once again. On Saturday, Danny was unstoppable and took home his 6th AA Pro win of the year. On Sunday, Danny was looking to take home his 2nd win of the weekend, but a crash in the 3rd main held him back to 3rd overall. Danny's Sponsors include Intense BMX, BAWLS Guarana, Fly Racing, Shimano, THE Products, SINZ Racing, Intense Tyre Systems, OGIO, Cyto Sport, Thomson, Oakley, GO211.com, S & M Bars, and BMXpros.com

Double A Marketing would like to welcome Steven Cisar to the roster of Pro riders. Steven has had a break out season in 2008, with a Podium at the UCI Supercross series as well as a Silver Medal at the UCI World Championship event just a few weeks ago. Steven recently signed a 2 year agreement with Haro Bicycles, so look for him to be attending the rest of the 2008 events aboard his new Haro race bike. Steven sponsors include Haro, Troy Lee Designs, Vans, Oakley, Intense Tyre Systems, SINZ Racing, S and M Bars, SDG, and BMXpros.com

More in this category: « LOCATIONS OF ABA BMX REDLINE CUP FINALS ANNOUNCED! Bubba Harris: Putting all his chips on the table. By gOrk »
back to top