Bubba Harris: Putting all his chips on the table. By gOrk 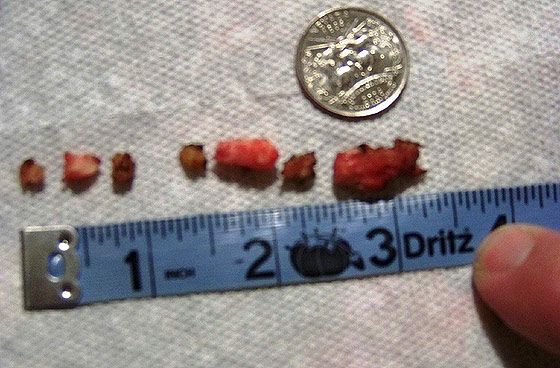 Last week, Bubba Harris went in for surgery to get “some” floating bone chips removed from his left ankle (leftovers from his foot dislocation last August). He’d told me that his foot specialist, who is a road cyclist, was amazed that he was in contention for Olympic qualification – stating that he technically shouldn’t even be walking; let alone racing. Bubba told me that I wouldn’t believe what they took out … and looking at this photo; it’s amazing that he was able to race this year and do as well as he has done – including a win at the NBL
Florida National in March and a Supercross semi in Australia. Hard to imagine the pain he’s endured in his quest to chase the Olympic dream.

Bub’ plans on a safe comeback return in 7 to 8 weeks, and figures he can still be in contention for the ABA No.1 Pro title upon his return – with a late-year charge possibly starting at Reno in late August or SoCal in early October. Incredibly, he is currently sitting in the No.3 spot of ABA Pro Points.