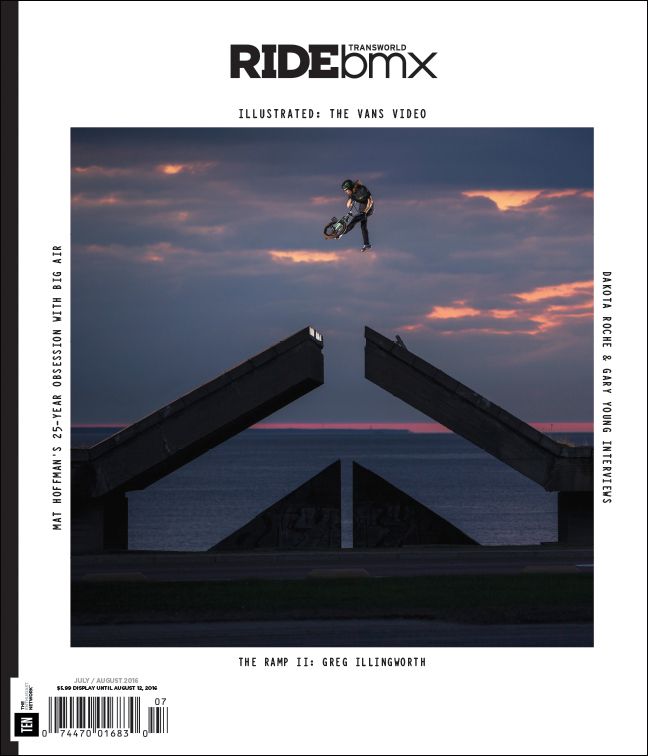 Start
Shawn McIntosh takes a leap of faith to his pegs, Dan Conway hits the hottest ledge in Philadelphia, and Zack Gerber does one of the largest barspin gaps BMX has ever seen—and his bike pays the price.

The core loves to hate him, the Internet just plain loves him, and others don’t know what to make of him. But one thing is for sure, Adam LZ received the biggest response for any Pro QA we’ve ever done. So that tells you something. And honestly, the most hated/loved dude in BMX actually has a lot of interesting things to say.

Products
Some of the latest goods from some of the greatest brands in BMX.

Softgoods
Attire to wear when busting moves on a BMX bicycle, as well as some more suited for taking your girl on a date, and in some cases, both.

Focus: Rooftop Edition
We shared the Focus section photos for this issue with Mike “Rooftop” Escamilla and gave him the reigns on the captions. Mike’s history and first hand contributions to BMX are to vast to name, but rest assured, his captions reflect his deep history. Respect.

Final Frame
Ted Van Orman is a damn good photographer. If you weren’t aware of that already, you will be after seeing this incredible photo.

The Vans Video Illustrated:
Behind the scenes, the making of, the story behind… Vans’ first full length BMX video.

Gary Young Interview:
Gary Young’s all street (with some pools too) part in the Vans Illustrated video is considered to be one of his best video parts to date. With 15 years as a professional rider, we dig into what went into his video part, where he is with riding, the future, and more…

Dakota Roche Interview:
Dakota Roche is a video part filming machine. He splits his time up between finding fresh new spots to shred, and then goes back and snags a heavy clip. When you see his section from Illustrated, and then read his interview, it’ll come together.

The End Of The T1 Ramp:
With the T1 ramp almost entirley dismantled, there was one sliver of transition left amongst a pile of lumber, and Bob Scerbo was there to document Joe Rich’s last air before to the final piece was taken down.

25-Year Obsession: Mat Hoffman and Big Air:
After originally setting his high air record 25 years ago. At the age of 44, Mat Hoffman soared 26 feet out of a 30 foot ramp—going higher than he’s ever before (and arguably anyone else has a BMX bike).

The Ramp II: Greg Illingworth
Greg Illingworth applies The Ramp to the streets of Tallin, Estonia, and London, England and rolls away with some signature Illingworth style moves we all know and love.

More in this category: « New issue of BMX Rider magazine out now! #printisnotdead Endless magazine #3 available at the better BMX shop in the UK now. For free. »
back to top