Vans x Toy Story collaboration shoes for all the fans out there. 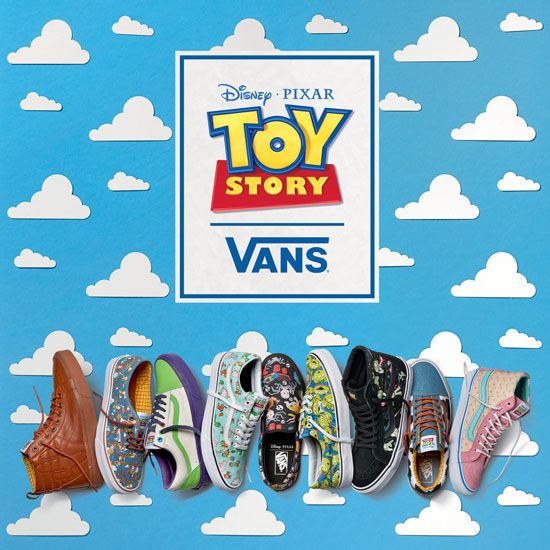 Vans celebrates the original characters from the animated film Toy Story in its new Disney•Pixar Toy Story collection. Vans showcases Andy’s favorite toys across an extensive assortment of adult and kids footwear as well as apparel and accessories this holiday season. Toy Story made its debut in 1995 mesmerizing generations of children and families everywhere with the tale of a group of toys who came to life when humans weren’t present. Vans revisits the nostalgic dynamic between the film’s leading characters, Sheriff Woody and Buzz Lightyear, along with their group of friends for an exclusive collection of footwear, apparel and accessories. Woody is the source of inspiration for a trio of footwear options. The Sk8-Hi Reissue PT transforms elements of Woody’s iconic cowboy boots 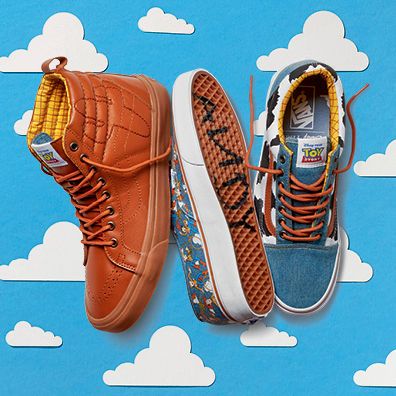 into hi-top form using full grain leather with custom cactus embroidery. The Old Skool is revamped to include denim and cow skin printed side panels and is finished with a brown leather Sidestripe. Rootin’ tootin’ Woody art can also be found on the all-over printed denim Authentic with a brown foxing stripe and waxed laces.

Fans can feel like Star Command’s leading space ranger, Buzz Lightyear, in the Sk8-Hi Reissue! Wear this pair with the lights out and stars and elements will glow in the dark! 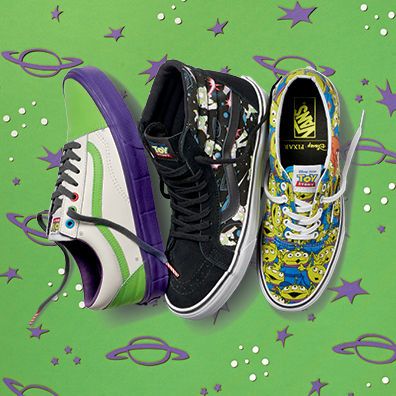 Disney•Pixar fans can have their very own Buzz Lightyear look with the Old Skool, featuring white and green leather uppers that make up Buzz Lightyear’s tonal space suit. Look closely and you will see hand-drawn screws and colorful eyelets atop a tonal purple outsole.

Relive the iconic scene where Buzz and Woody encounter the claw amongst the aliens in an all-over printed Era with a special glow-in-the-dark surprise. Look closely and you will discover the duo hidden among the aliens! A unique element can be found on the sole of each Woody and Buzz style to reveal Andy’s signature from the original Toy Story movie. 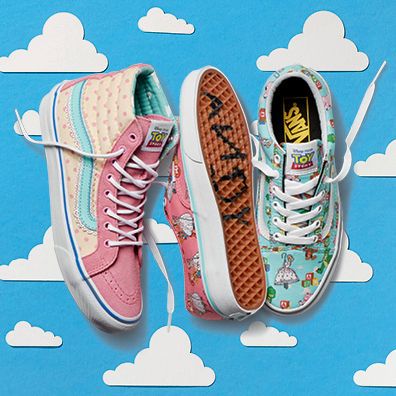 The collection wouldn’t be complete without Hamm, Slinky Dog, Rex and Bo Peep who inspired their very own Old Skool design. Women around the world can channel Bo Peep in a special polka-dotted Sk8-Hi Slim with a lace adorned Sidestripe while Woody and Bo Peep are featured together on a pink Authentic.

All of Andy’s favorite toys are celebrated in a collection available for kids and toddlers with exclusive Slip-On styles.

The collection is finished off with a women’s apparel and accessories line of tees, fleece, hats and backpacks inspired by Woody and other toys, while the men’s assortment features Buzz Lightyear and Alien printed backpacks, hats and crew socks.

The Disney•Pixar Toy Story collection is available to shop in Vans retail stores and online.

More in this category: « Dennis Enarson Signature model. HARO SD. Special deal inside. October 2004 - BMX DVD: Can I eat? »
back to top