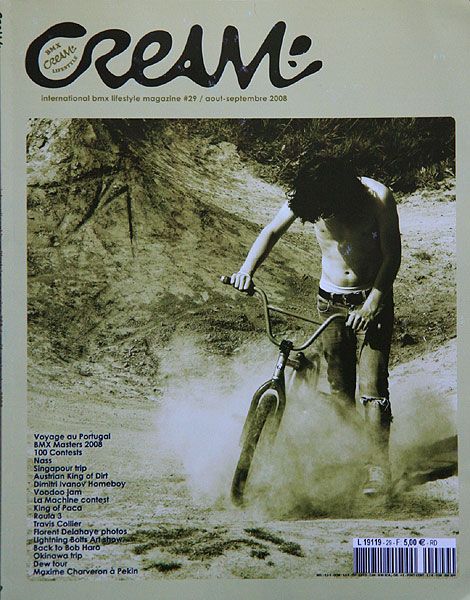 Cream magazine keeps bringing out interesting covers. But in a world full of BMX magazines you need to be different to stand out. For 5 Euros you get the following:
-BMX Masters 2008. The biggest comp of the year.
-Back to Bob Haro. True legend
-Dew Tour in Baltimore. America cares. Does anybody else?
-Singapore trip. Long way away from home
-Dimitri Ivanov. French Homeboy
-Fashion. Fluo and Fresh. Back to the 80-s
-Florent Delahaye photos. Portfolio of good stuff.
-King of Paca. The concrete bowl in Marseille is still ripping
-BMX Old school legends in China. Lightning bolts
-Maxime Charveron. Is he driving that Fiat yet?
-Nass. Bikes, Beers and Bitches?
-Massilia Cup. A-Cup? B-Cup? C-Cup? D-Cup?

-Okinawa trip. Sounds too Japanese for a French magazine
-Voyage in Portugal. Looking for some sunshine
-Roula 3. Who's da ruler?
-Travis Collier. Cream loves flatland. Flatland loves cream.
-Voodoo Jam. We told you so. More flatland.
-La Machine contest. Who got first?
-Passeo Cup. Man, there are a lot of comps going on this summer.
-Dirt in South Africa. Beware of the tigers
-Fise Mandelieu. Did Maxime score some more points there?
-100 Contests. Seems like they've covered them all in Cream # 29
-Austrian King of Dirt. The Austrian's are getting dirty. I'll be back.
-Patocherie. I had no guts to try the gas-trick yet Patrick. Maybe you should show me next time.

More in this category: « B-Rad has a new frame coming out on Hoffman Bikes. Bike Check! Underground Products »
back to top