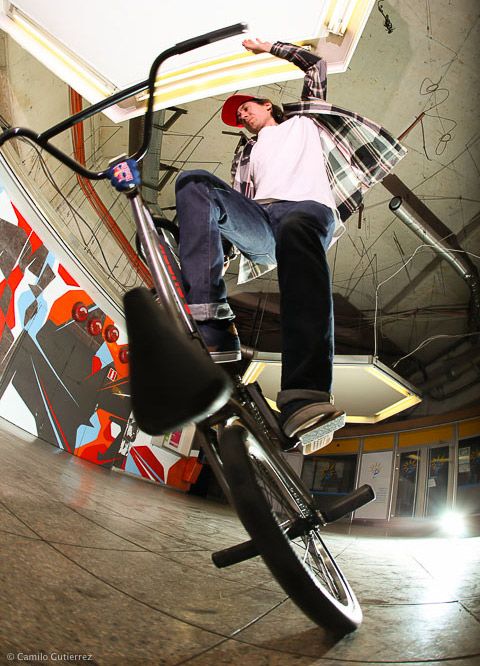 Camilo Gutierrez is putting on a BMX / Urban Photography Exhibition, that he's having in Berlin, Germany at 20th September 2014. The name of the Exhibition isAppropriation of Urban space Through BMX Freestyle" The Exhibition include images from different places (Europe, Africa, Asia, Latin America) and riders like: Jorge Viki Gomez, Waldemar Fatkin, Matti Röse, Daniel Dhers and more! It will be held from 20th to 27th September 2014.
Gallery: "Aus der Liebe zur Kunst"
Address: Schönhauser Allee 54, 10437 Berlin, Germany
Opening: 20.09.2014 at 19:00

Photography Thesis “Appropriation of Urban space through the BMX Freestyle”


over the last years which relates an extreme sport developed in the city, such as the BMX Freestyle, with architecture, urban property and the surrounding environment. The photographer’s perception subjectively transforms the city with its architecture, its daily life and the actions, perceptions, use and appropriation of the sportsman towards that space. The image produced tries to relate the city with the urban sportsmen (BMX) through their executions and/or actions in the public space. This, as a result, brings images of urban interventions through the extreme sport.

The sensations generated while going along the streets, the big cities, the small towns, are appropriation and belonging; the deeper the exploration, the bigger the excitement and anxiety for the new, the novel and the spontaneous. The unexpected adventure, the unforeseen action. Making an incursion in the metropolis is much more than a ride along the main avenues. Going over a city turns an adventure, a trip within the depths of the urban space. As time goes by and oneself gets more interested in the city, the relationship with the urban space changes from a transit state to a proximity and belonging state.

After coexisting with the concrete metropolis, our perception has been transformed and adapted to circumstances inside the city. It is in the urban space where elements coincides for the realization of the sport practice, the traffic and the chaos are left apart, the norms and laws are not being considered at that moment, especially during the period of time of the execution, the sportsman feels assurance about dominating the space.

This essay seeks to consider groups of youngsters worldwide, without social, cultural or economic differences, who take over public spaces in order to perform their sport practices. It does not only refer to the sport’s execution, but also to the appropriation and proximity with the city. The territory belongs to everyone and to no one at the same time.

More in this category: « Expo FUN IS AWESOME. 25 October, Utrecht, Netherlands. House of Vans LONDON; The New Home of Creativity OPENS AUGUST 9th, 2014 »
back to top