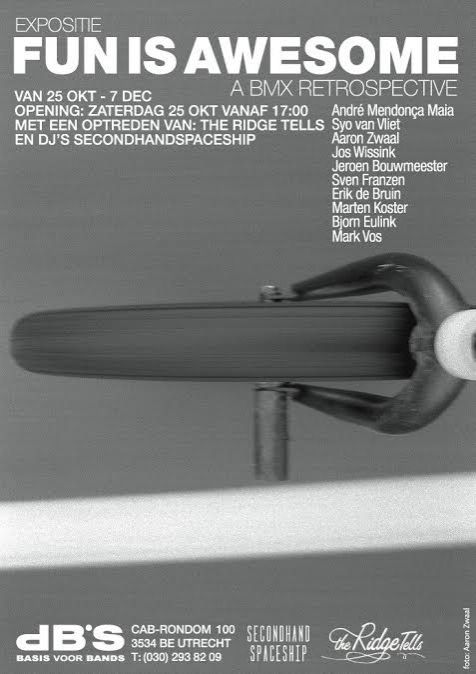 Fun Is Awesome collects works from a group of artists who draw inspiration from their involvement in BMX riding. BMX started out in the hazy days of the late 1970s as Bicycle Motocross, a pedal powered version of dirtbike racing. Like skateboarding before it, BMX grew out of a combination of teenage suburban boredom, and companies waking up to the fact that millions of kids had money to spend and time to kill. But while the era was rife with bizarre novelty products, the BMX outlived its status as a youth fad and developed into a bonafide sport, with the advent of federations, leagues and tracks being opened up in most towns and cities throughout the 1980s.
Movies like ET and Rad typify the immense popularity of BMX at the time. The 1980s also saw the development of freestyle BMX riding, which saw riders invent creative tricks and stunts on the bikes in favour of competition-based BMX racing. This marked the advent of BMX as a counterculture, along the lines of skateboarding and surfing, which has continued appeal to a wide


variety of riders and followers worldwide.

What marks BMX out from other extreme sports is the sheer versatility of terrains that can be ridden. From skateparks to cityscapes to carefully sculpted dirt jumping trails, riders put tremendous effort into reinventing and crafting environments to enable them to perform their tricks.

The artists exhibited here pick up on different aspects of BMX within its environment. They draw inspiration from the fiercely independent ethics of self-organisation that characterizes the scene, a reaction against the highly commercial beginnings of BMX.

Some images showcase the way in which ordinary pieces of street furniture are reinterpreted, leaving ordinary onlookers in a state of disbelief. We see them lampoon the conventional image of the BMX as a kid’s bike, using playful and childlike illustrations. Above all, these images provide a glimpse into a bristling subculture that celebrates the sense of freedom and abandon of riding for its own sake: fun is awesome.

More in this category: « JEFF DECKER's Unique Expo at The HUB | Paris BMX Photo Exhibition in Berlin by Camilo Gutierrez »
back to top