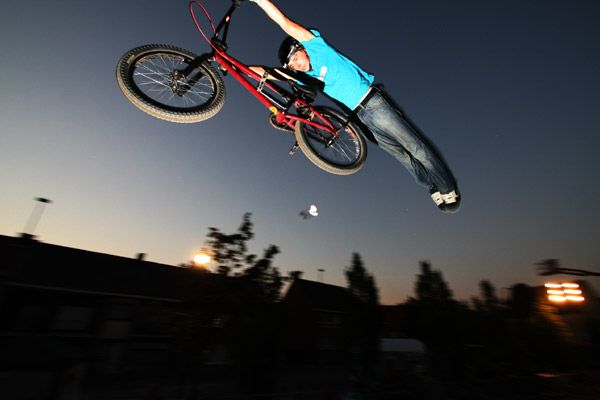 The first weekend of August was a busy one. Too many events to choose from: -X-Games in LA -S&M party at Sheep Hills -Flatground in Amsterdam -MX GP in Namur -Red Cross Adventure, Belgium. You wouldn't believe it but we went to the Red Cross Adventure event in Hechtel, Belgium. Peter Geys and the gang of The Zonk had teamed up for a BMX/music happening in the middle of Hechtel-city. 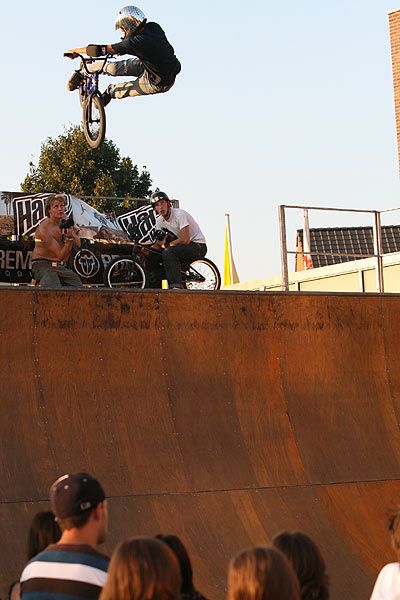 And in the middle it was. The vert ramp was put right in front of the local council's door. The result was that during the week two weddings had to walk over the vert ramp to get into the door. They didn't even see this as a problem. This is Belgium and we love it. 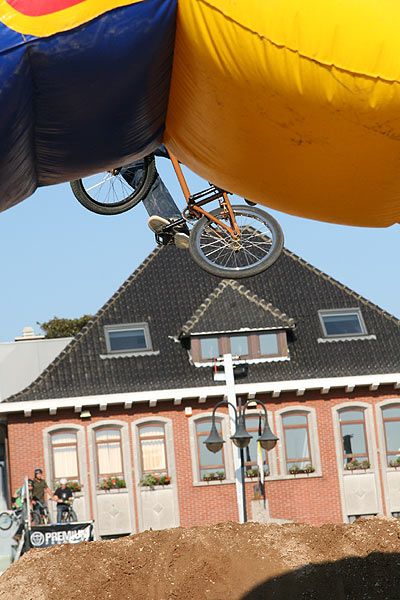 The Red Cross Adventure was a vert/dirt event. It had a unique set up where one platform of the vert ramp was used as a starting platform for the 6 pack that was built on the town square. It was a bit of a drop but none of the riders saw this as a problem. The 6 pack wasn't of Elevation standard but the riders who were there could clear the gaps. 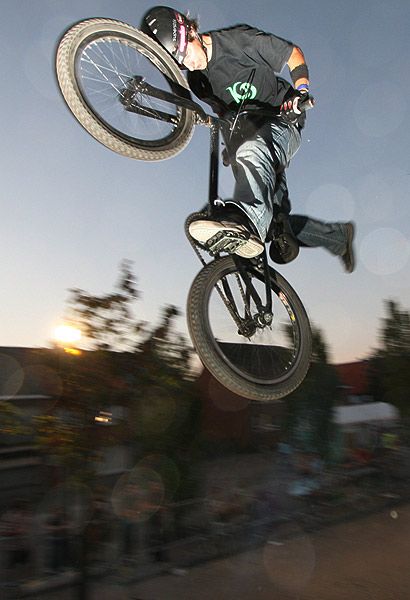 Dirt was split into two groups: Pro and amateur with each having enough riders to have a qualifying round. Qualifying took place during daylight (with the sun in their eyes) but the finals were planned for 10pm right after the sun had gone down and the lights were directed on the dirt jumps. Local live bands made sure there was enough noise all day and the Red Bull defender had some raving tunes available with a girl rapping live. Beer stands were everywhere and they were used well. 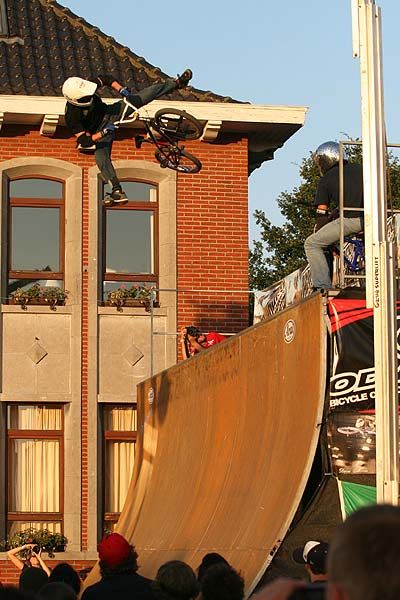 Before the dirt finals a vert session was had. Main guys on the ramp were Jimmy van Belle, Peter Geys and Jean-Marie Baertsch. Tim Eichert had already taken himself out before the session started an a big hang up where he landed on the middle section and bounced up on his shoulder a few times. Time out for Tim. Sander Nieuwenhuis and Aze disappeared as well but the show that Jimmy, JMB and Peter put on was great. The locals loved it and so did the TV stations that filmed every move. 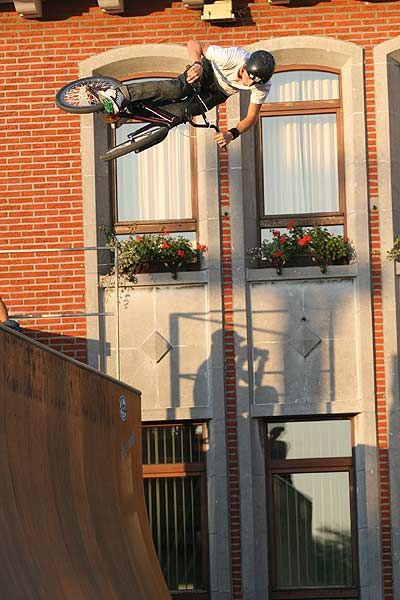 Jimmy did airs at decent height wearing a pro-tec helmet with teeth protector but if he continues to ride vert (he should) it wouldn't hurt for him to buy one of those full face helmets before he smashes his face on one single hang-up. He looked smooth but it can always happen. Better be safe than sorry. Jimmy did flatspin 540-s in the ramp which looked good. He pulled them again and again (after the comp). 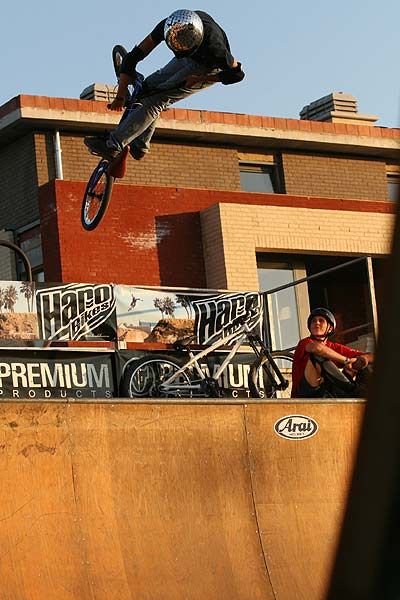 The battle for first place was between Jean Marie Baertsch and Peter Geys. Peter had the tricks where JMB had the style. How do you compare the two as a judge? It wasn't a unanimous score but the Bike Devil got first with lookbacks, inverts, no-footers, and 540-s + tailwhips to end his runs. JMB cruised around and pulled griz airs, no-handers, one-footed MX-airs, inverts and X-ups. Again, it fit the program well and after the session it was straight to the finals for both Jean Marie and Jimmy. 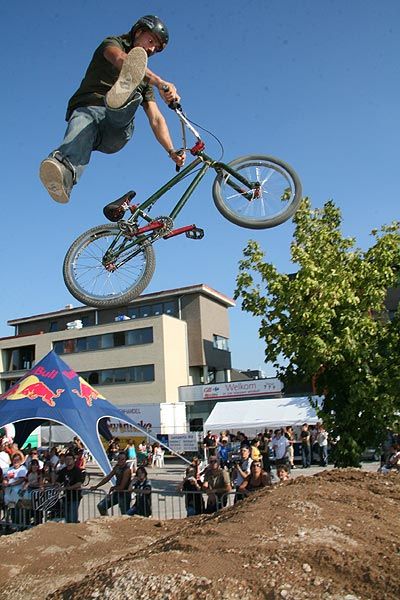 The finals for both Pro and Amateur consisted of three runs of which two runs would count. The DirtE19 MC from Antwerp was doing a great job and fit the Belgian contest well. It's about fun and they understand that part over there. 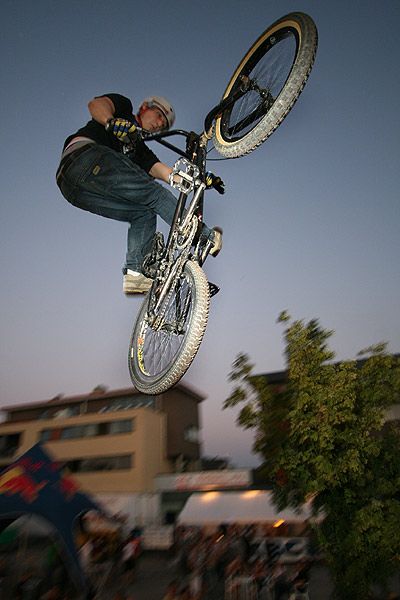 Den Tulder got a new name: Van Zulder. I'm not sure if it helped him or not but he won the pro comp and pulled Doyle-style turndown 360-s and Forte-style tabletop three-sixties. The Carhartt rider received 705 points, 10 more than Quentin De Martelaere who never got to step on the podium in Hechtel. A little mistake in the scoring saw Quentin finish in ninth but that wasn't right. It got fixed in the end but it's hard to turn back the ultimate feeling of being on the podium on the Red Cross square in downtown Hechtel in front of all the fans. Haha, don't think Quentin cared much about that. He has the feeling of getting the place he deserved now (2nd) and I'm sure the organization will get him some goodies that were provided by Haro, Eastpak, Odyssey and Premium. Quentin ripped in all of his three runs.

Sven Fucking Grieten has the best middle name ever. He barely made it to the finals but he showed that he could throw some mean nothings, turndowns and no-foot cancan to no-foot cancans. Solid runs for third. Jimmy van Belle rolled the dice and attempted frontflips, 3-whips and double whips on the middle set. Making it through the pack that way was hard but he still got fourth. 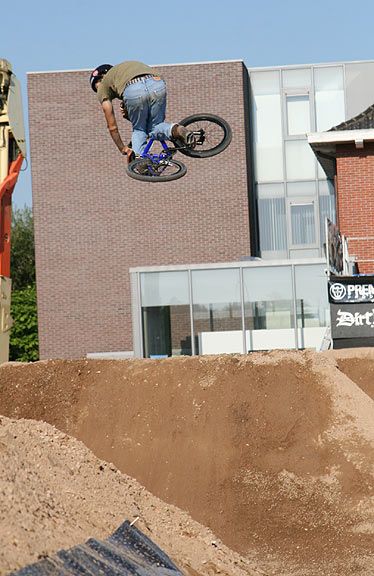 Jean-Marie Baertsch did no-handers and no-hand 360-s for 5th and was followed by chill master Hannu Cools, a consistent Nick Snoeys, a calculated Pim van den Bos and Riccardo Moes.

The Am BMX-ers had to deal with some MTB sandbaggers. Find the results below and check the photos of some of the riders in this report. 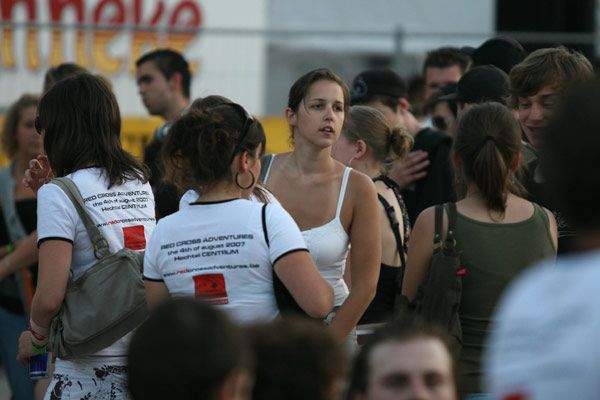 It was a good night out with relaxed people and plenty of brewski's. We need more Belgian events like that. The good part was that within 45 minutes Carry had dropped us off at home. No need for 13 hour flights to the X-Games, the S&M party or spending hours in the car for the other events. We'll be back! 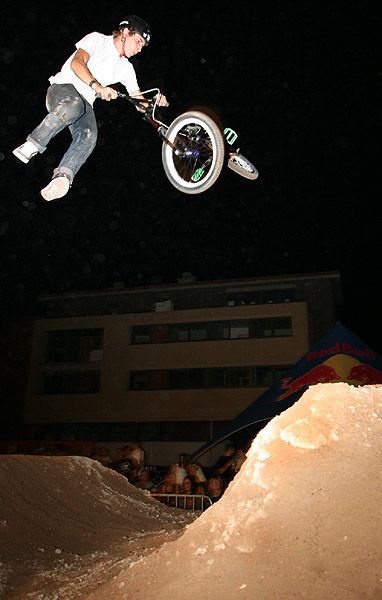 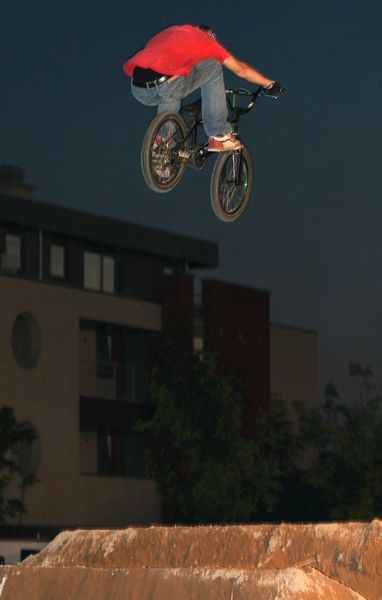 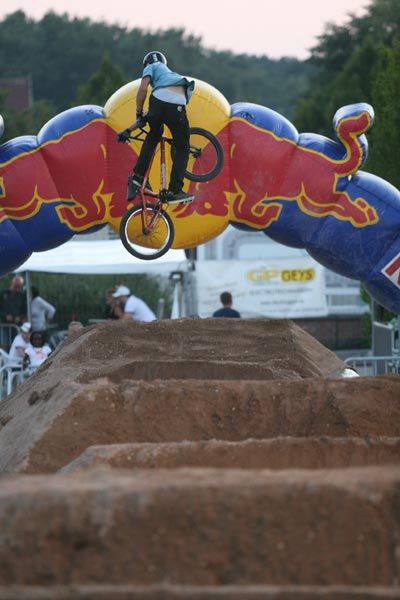 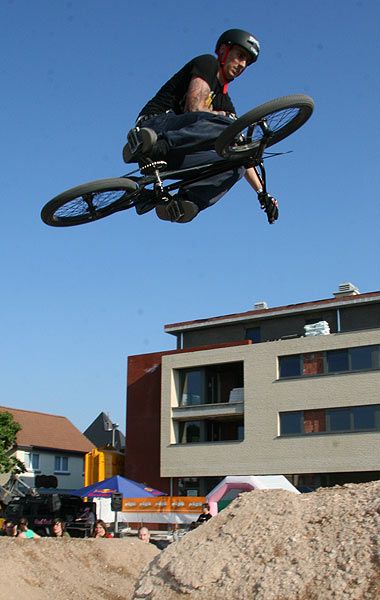 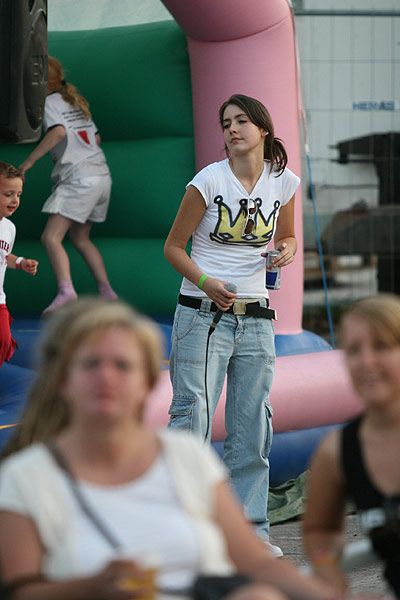