Written by  Bart de Jong
Read 4014 times
Tulsa, OK: The Sunday night showdown at the OK corral saw Redline's mightiest gunslingers walk away with three silver Cup's; marking them as the Best of the Best when it comes to BMX racing.

NO.1 PRO BATTLE: As everyone expected, the chase for the Pro Cup came down to the three mains, between Kyle Bennett and defending Champ Bubba Harris. In the  motos, they were pitted against the other on Saturday twice, and Bubba took both wins. A good confidence builder, and a sign of things to come. In the semi's, Kyle won his in dominant fashion, as did Bubba. Which meant the race for the 2005 title would come down to main time, and in ABA tradition -- in dramatic style.
Main number one saw Bubba win from start to finish, with Kyle on his heels, but not close enough to make anything happen. Bub's confidence showed, as he ran a much better first main lap than the year before.

Main number two had Bennett on the inside and out front, but Bubba pulled up alongside him and took things over thru the tricky rhythm section, to score yet another win. Two wins for the Redline hero, and two 2nds for the challenger. Bubba was definitely feeling the title was his and was in the zone.

In the third and final main, Bubba was in lane 8, on the far outside. Holeshotting from there would take a miracle, but he was willing to try. By the first turn, Bennett was once again in the lead, but Bubba quickly blasted his Flight Pro XL to the second spot and attempted to reel in Bennett down the third straightaway. Bennett did a great job of holding off Harris' charge and it looked as if he would be the only rider to beat Bubba all weekend. But, wait! ... carving the last turn like a plump Thanksgiving turkey, Bubba powered up alongside Kyle and raced him to the finish, both pros thrusting their front wheel toward the line to score the victory. A moment of silence hit the arena for a second before the announcer called out, "Bubba Harris gets the win!"

That made for straight wins in the mains, and being undefeated all weekend long. The $5,000 Grands win was his, and the National No.1 plate would remain ziptied to his bars. Along with all the glory also came the keys to another brand new Hyundai Sante Fe. (Which most likely will be driven by his littlest sister, as she will soon get her drivers license.)
By winning his second straight ABA Pro Championship, he joins such BMX legends as Brian Patterson, Gary Ellis, Pete Loncarevich and Christophe Leveque in the BMX record books for back-to-back No.1 titles. With 22 AA-pro wins in the season, and both ABA and UCi World Championships, BMX Plus Pro of the Year and BMXer’s Golden Crank, this repeat No.1 title tops off what could very well be one of the most successful years of any BMX Pro in History. 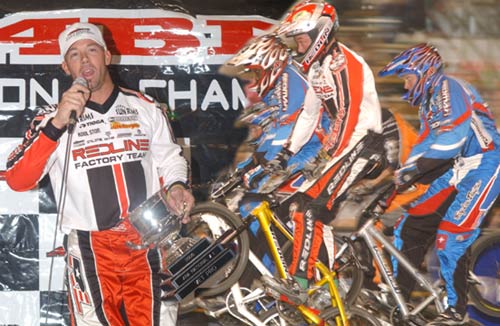 NO.1 VET PRO BATTLE: Nursing a tweaked knee that will go under the knife next week, Jason Carne$ was out to capture his fourth consecutive No.1 plate in the 30+ Vet ranks. The only person who could stand in his way was Utah’s Todd Parry. With three titles already under his belt, Jason knew what needed to be done at the Grands. You've got to turn it up to eleven.
And he did just that, winning the first two mains in dominating fashion. Come third main, though -- the drama finally hit the fan. With Eric Rupe out front, Carne$ and Parry began chasing him down in the rhythm section. Entering the final turn, Carne$ felt the presence of a front wheel coming to the inside of him, and hung low to hold off the charger. It was Parry, and raging anger overtook him when Jason cut low to hold him off. Without time to think twice, T.P. took Carne$ out, simultaneoulsly sending himself over the berm as he sent Jason and his gold Proline straight to the dirt. As five other racers flew by, Jason got up and back on his bike, and was struggling to clip in to his pedals as T.P. re-entered the track and came at Carne$ again, hip-checking him off the side of the last jump and putting the defending Vet Pro back on the matt. The crowd let Todd know what they thought of him; as did the track officials. It was such a blatant takeout that the ABA was quick to DQ Parry, putting him to last place. Still, that didn't do Jason Carne$ much good, as he'd have to settle for 7th place in that race, putting him down to 3rd place overall for the day instead of the win.

The tension mounted as to how the year end points would tally up? Would a 3rd place score be good enough to hold his lead? Luckily, it was.

For the fourth consecutive year, your ABA No.1 Vet Pro is Redline's Jason Carne$.

For those keeping record, in the twelve years that ABA has run a Masters/Vet Pro class, only three men have raised the silver Cup above their heads -- Harry Leary (93-94) , Eric Rupe (95-'01) and now Carnes (since '02 to present).  Even more interesting is that Eric Rupe has won the Grands main that past three years, yet lost the title to Jason -- who's one and only Grands win was with his first No.1 Championship, four years ago. Which explains why Carne$ felt especially ripped-off after the T.P. take-out. All he needed was a 5th place or better to get the days’ win.

NO.1 CRUISER BATTLE: The 24" title in 2005 was definitely an exciting one, with the predicted winner of the Cruiser Championship expected to be a young one. Kicking off the ABA battle charts was 9 & Under cruiser, in which Redline rider Dakota Senger made his presence known with a flat out win. There was some crazy action at the start, taking out the real title contender and a DQ called on another rider who caused the crash.  But it was a Redline rider carting off the 7 foot tall 1st place Grands trophy back to Eugene, OR. in the end. Little did he know it, but Senger's win would help secure a shot at the Cup for to two other Redline riders.

Next up came Redline’s Logan Owen--who entered the Grands in the No.3 position for points. His local arch nemesis is also his local competitor. He and fellow Washingtonian Lain VanOgle not only compete against each other on weekends at River Valley BMX in Sumner, but they were both up for the No.1 in the entire Nation. Unfortunately for Logan and Redline, VanOgle was not to be denied this weekend and wound up with the win and the lead for the National Championship. Depending on how the older age classes would go, it looked as if VanOgle could be the Champ.

That was .. until 36-40 cruiser lined up in the gate. With three riders having the final shot at the illustrious No.1 plate, this main was sure to be a nailbiter. In the hunt was Washington's Dave Archibald, Capt. Kirk Chrisco the personal trainer from Palm Springs who has been Natl. Cruiser champ twice), and Redline~Spinner's owner/rider Bob O'Gorman. You could feel the intensity before the starting gate dropped, and the crowd sprung to their feet as O'Gorman grabbed the holeshot and held off all comers in the next 30+ seconds. Down the third straight away, it looked as if Chrisco was going to close the gap, but Bob and his golden Proline cruiser maintained momentum and took the Grands victory. The No.1 title was his ... and made for Redline's first ever National Cruiser title.

Our congrats go out to Bob and his brother Swifty, and the entire Spinner's~Redline team. The No.1 plate couldn't have gone to a more deserving rider!

In the end, Redline Pros and one co-Support Redline racer took three of the eight available National rider titles; thus proving again and again why the most popular bike on the BMX track these days is the race-proven, Championship-winning REDLINE series of fine and affordable bikes.

More in this category: « Chenga1 contest. The final chapter New Premium Products DVD in Production »
back to top