Athletes who are not pre-qualified may qualify for the Panasonic Open and Right Guard Open, the Tour’s first two events, in one of the following ways: 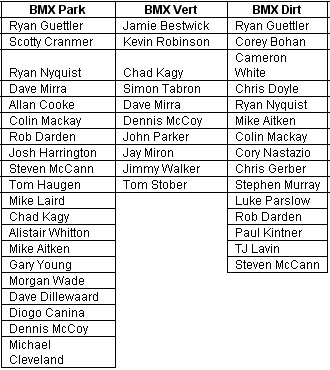 - Open-qualifying competitions onsite at the two events, open to professional athletes in each sport
- Three to four wild card spots per discipline, to be filled at the discretion of Tour management
- Results from the Panasonic Open (applicable to the Right Guard Open only)

After the first two Tour stops, current Dew Action Sports Tour rankings will determine the athlete field for the Vans® Invitational, Toyota Challenge and PlayStation® Pro. Wild card spots will be included at all Tour stops.

Dew Action Sports Tour standings are based on a cumulative points system used to rank athletes throughout the season. At the conclusion of each Tour stop, athletes will be awarded points that correspond to their final placing in their respective disciplines, and will be ranked accordingly. Final point standings determine the recipients of the Dew Cup, which will be awarded to champions in the six disciplines within skateboarding, BMX and freestyle motocross. Athlete of the Year will be awarded to the athlete with the single highest point total in one discipline across the Tour.

More in this category: « Taj Mihelich was simply sick of the business part..... Are you good enough for free shoes from Osiris? »
back to top