Taj Mihelich was simply sick of the business part.....

Written by  Bart de Jong
Read 13711 times
The cat is out of the bag. Taj Mihelich has given up his co-ownership of Terrible One. To avoid the rumours going  ever crazier, we wanted to show you what Taj had to say.

Hello everyone! Ok, lets see, from what I’ve heard the rumors are getting out of hand. I have indeed made some major changes in the last few days, but nothing as dramatic as the leaving Austin to take Roscoe to race the Iditarod Arctic Tundra race!

I’ve decided after a few months of deep thought and consideration that I am going to officially leave the business side of Terrible One. 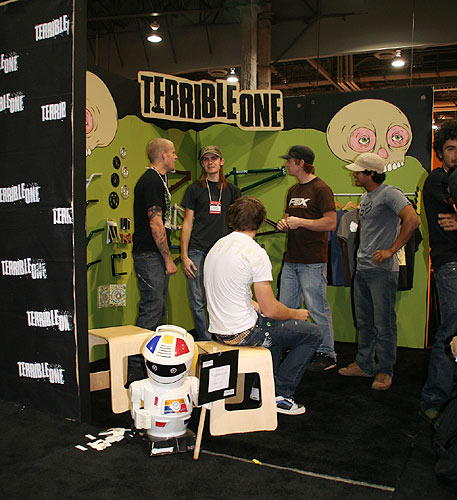 What that means is that I am giving up my half ownership of the company to Joe (Rich). From here on out I won’t be involved in the day to day running of the company or the business side of it. Joe has asked me to stay on as a team rider and so I will still be riding T-1 frames and parts. In fact he put in a order yesterday for another prototype Taj frame. Eventually we might even release it (but not anytime soon as there are several big projects in the pipeline ahead of mine).

So why would I want to give up my part of T-1? Probably anyone who’s ever had their own business would know the answer to this… it’s a lot of work! For me its been a matter of not being able to do a good job at shutting things off when the work days over. I tend to take matters home and obsess over them. The result is that I feel like I never stop working, and I start neglecting everything else in my life. We’ve done T-1 for almost 8 years now and I felt like it was time for me to move on to something else. Another factor in this is how much of a test it’s been to work with a close friend on the company. I love Joe, but the business has made things a bit rough for us at times and I value our friendship far more then the company. I finally felt like walking away from T-1’s inner workings was the best thing for me.

For now I’m making an effort to NOT take on any more big projects, so no new companies or business plans for me. My plans for now are to focus on just riding my bike. We have the Etnies video coming up and I’m putting a lot of energy into filming for that. I should be traveling a bit more then usual this summer and on my bike more then I have been in years. Good times for me! Joe has decided to keep T-1 running and is heading up everything by himself here in the office (so don’t worry, T-1’s not going anywhere).

In unrelated news, I also quit Coalition. I guess just being swept up in the big changes over at T-1 I thought I would also rearrange some other aspects of my life. Greg (Coalition owner) and I are getting on well still and all is good on that front..... Thanks to everyone for all the years of support. I hope all your support continues and helps Joe keep this all going for many more years.