Written by  Bart de Jong
Read 3354 times
Dew Tour round # 3 was in Portland, OR over the weekend and Scotty put on another good show. He qualified first on Saturday and came back Sunday to step it up a notch. A crash early in the first run put him in 12th place going into the second run, he was last to go and the pressure was on. A solid run put him 2nd place overall for the day and puts him in 2nd place overall in the series with two more rounds to go. He was riding the new updated 2007 Sheriff for the first time and loved the changes. The BMX Park event showed live on NBC Sunday afternoon.

Scotty left straight from Portland to do some shows in New Zealand. Joined by Chad Kagy, Colin McKay and Ryan Guettler they will be doing a week of big production shows similar to the “Boom, Boom Huck Jam Tour.”  When he gets back he has a week off then going to Dew Tour # 4 in San Jose, CA Sept. 9th and 10th. 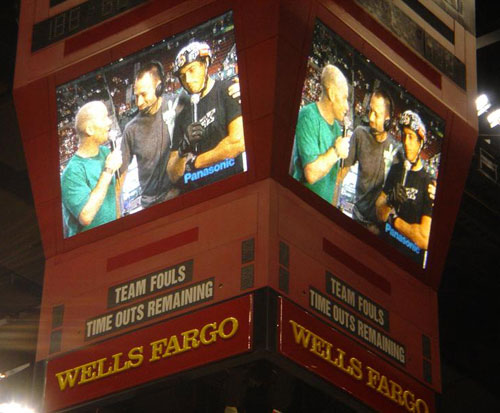 BMX Supercross will be a special added event at San Jose Dew Tour # 4, BMX Supercross is a made for TV Pro only race on a beefed up BMX track. Paulie Lange missed this event last year with the flu, big jumps are his style, let’s see what he has for it this year. The week before San Jose, Paulie Lange will be racing an ABA National in Reno, NV and the Felt/Saab/Extreme Sports Factory race team will be racing at the NBL Grands (Louisville, KY) going for a top 3 overall in the Team standings.

-Picture of Scotty’s new 2007 Sheriff, frameset available early September.
-Picture is what happens when Scotty gets hold of some fake spray paint (washes off) This is his Mom’s car….
-Picture of Scotty looking excited about Ryan’s joke on the big screen