Too much news. By Felt BMX's TM Alan Foster

Written by  Bart de Jong
Read 3336 times
A lot has been going on in the Felt camp and I have been super busy finishing up the 2008 line of bikes. The bikes look good, be on the look out late summer. The biggest news is the Scotty Cranmer is now a bicycle shop owner. SC ACTION SPORTS opened on April 1st. It was an empty building to start so it will take a while to get fully stocked but from what I hear it is growing everyday. Of course a full line of Felt BMX bikes are in. Back in the day there was a huge BMX shop in NJ called Bicycle World of Howell, over the years ownership changed and the BMX focus was lost. The opportunity came up to open a bike shop in the building and Scotty and his family are going for it. The Howell BMX track is behind it and has plenty of land for other projects when the time comes. Cool to see another rider becoming a store owner. Don’t think the new bike shop has kept him tied down, he has been a busy man. At one point last week he had a Jeff Z. shooting him for Fox photos, Fuel TV doing a “day in the life” and Walter P. was with him for a week filming for a Props interview. In the middle of this he flew to CA to have a meeting with a new potential sponsor. Once that calmed down he headed off to Utah, New Mexico, Dallas and Austin to do some signings at Vans retail stores. 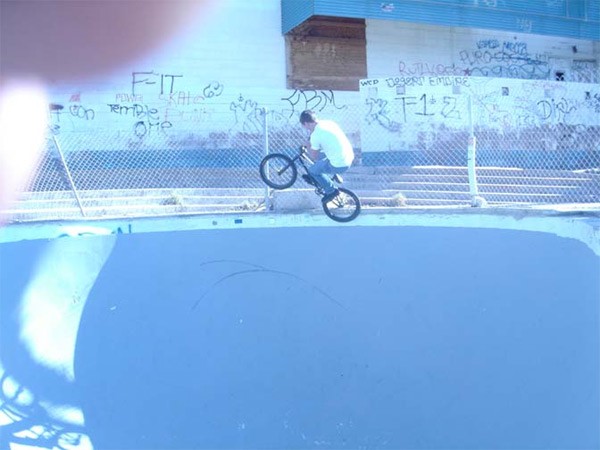 -The Props Rock-n-Roll DVD just came out and I get to watch it on the plane I am about to get on. It has several SK8 park stops over the Midwest plus the footage of his “tire-tap front flip” or “abubaca front flip” , whatever you call it, from the Ride BMX cover . I would assume better bikes shops would stock it or it is available from propsvisual.com.

-Check it out. Ride UK has a huge interview in their mag that will be out soon, I believe issue #103.

-Mr. Paulie Lange injured his foot and missed a few races but is good to go again and the season gets going really soon with 3 back to back weekends ABA Roseville, NBL Prunedale and ABA New Mexico. Paulie in living is Arizona for awhile and searching for riding spots.