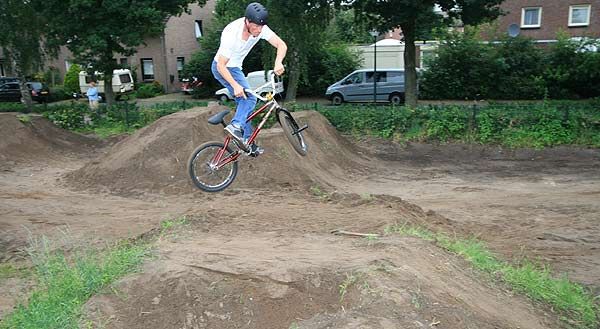 On August 4th 2007, Red Cross Adventures presents a dirt jump contest in the city of Hechtel (Belgium). Peter Geys & his crew are inviting you to this bmx/music-fest. The success in 2005 with Garden of Vert at his backyard & the build of several bmx freestyleparks in the province of Limburg (Hasselt, Lommel, Genk), made the Peter - known as the Bikedevil - up for an even bigger concept: Red Cross Adventures. 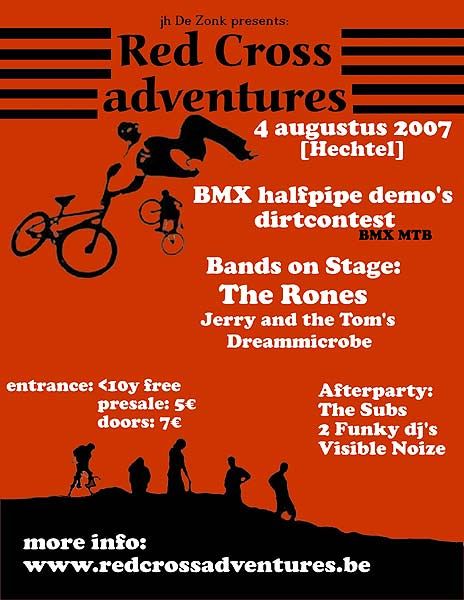 Contest-ranking to Dirt-Jumping for pro’s & amateurs, as for BMX as MTB, starting qualifications at 15h, up to finals at 20h. There can also be checked out the mini-vert for selected riders, giving some demo’s with the Bikedevil himself. Presentation of the rides will be made by DirtE19’s mc Scale. Qualifications en finals will be judged by the fatbmx.com-crew Paul & Bart de Jong. During out the sessions a bunch of guitar-gig’s with local band Dream Microbe and some fresh sounds by The Rones, closing up the party with live-electroset by dj-duo The Subs.

Riders can sign in at the website www.redcrossadventures.be, and are welcome @ Hechtel, Friday, the 3th of august07 from 16h00 for taking trainings at the trails. They will be welcomed with food & drinks, including youth hostel accommodations for the whole weekend. Reservations by the website has to be made, if you arrive at Friday!! Riders arriving at Saturday can check in from 12h00. Riding can be taken up from 13h00.

More info about location, timing of the event & animations: www.redcrossadventures.be and www.bikedevil.com
Tweet