Written by  Bart de Jong
Read 12354 times
East London's first ever BMX racetrack rolled into action on Sunday with an opening race meeting in Dagenham attended by the Mayor of Barking and Dagenham. Cllr Marie West joined other civic dignitaries at Old Dagenham Park on Sunday, to officially open the racetrack which is just the second one to be built in London. Around 120 BMXers, young and old, novices and experts, arrived at the park to compete over various distances and in different age groups. The ambitious project to build the track, formed part of Barking and Dagenham Council's Parks Development Team's masterplan of improvements for the park off Siviter Way, Dagenham and features an eight-person track with a start hill and a variety of challenging jumps and humps. 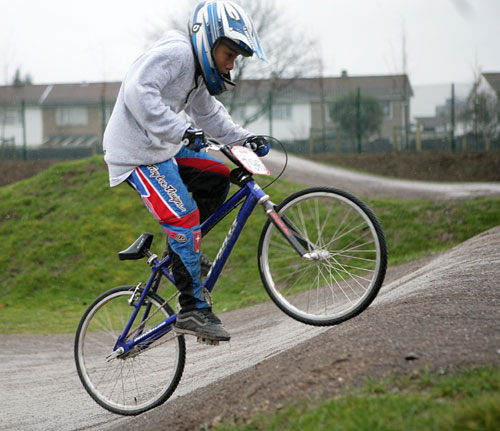 At the official opening Nigel Hampton from British Cycling described the facility as a first class jumps circuit while Paul Rungay, founder of BAD (Barking and Dagenham) BMX Club, said the racetrack would prove to be a popular facility judging by the impressive turnout on the day. Plans for the racetrack originated from a clamour from local young people for the Council to build a jumps and race track on the site of an under-used football pitch at the park. The Council stepped up plans to seek funding after a petition was drafted by park users and local residents in support of a racetrack. With funding from the Big Lottery Fund and the Council, the project was agreed along with additional improvements to the park including a new public toilet, restoration of the pavilion, a teen shelter, upgrade of the car park and park gates, robust signage and new paving.

Cllr Cameron Geddes, Executive Member for Parks, said: "This is a remarkable achievement, which local people should be rightly proud of. It will be a tremendous asset to the area for years to come and a unique facility in the capital. "The riders, supporters, volunteers, race officials, timers and St John Ambulance Service helped make the day a huge success." Meanwhile Gavin Flynn, Park Development Officer, praised the work of the Landscape Architect Elizabeth Greenwood and contractor, Southern Landscapes Ltd, who completed the project on time and within budget.