Written by  Bart de Jong
Read 5337 times
– El Cajon, California – Factory Formula riders Donny Robinson, Amanda Geving, and Warren McDow still lead the pack in UCI and NBL points, once again establishing Formula as a dominant force on the race scene. After a UCI win at the NBL Boulder Dam National, dR Donny Robinson took over the lead in UCI Elite Men’s Standings. With his NBL win on Sunday, coupled with a second on Saturday, dR extended his lead in NBL Elite Men’s points as well. Consistency has paid off for Donny. “I’ve been working real hard to stay on top of my game and it feels good that it’s working,” stated Robinson. Donny is also still on top of the ABA Pro Cruiser points heap and is sitting in the #2 spot in AA Pro. Donny Robinson rocks the Formula Solution Pro for his 20” and the Solution Pro Cruiser, for, uh, his cruiser.

Amanda Geving also sits atop the UCI standings in the Jr Women’s division. With a victory in Saturday’s UCI main, Geving extended her points lead giving her a nice cushion, especially since she will be missing the NBL’s Nellis national. In NBL standings, Geving also 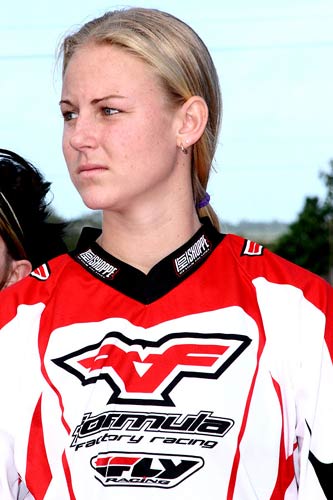 Atlanta’s Warren McDow was killing all day in UCI Jr Men’s racing in Boulder City but, in the main, got into a tangle with Euro powerhouse Martijn Scherpen down the first straight, letting Joey Bradford take the win. McDow settled for third. The podium finish was enough however to keep McDow on top of the UCI Jr Men’s points standings. In 17 Expert, “McDominator’s” double in Boulder City was enough to plant him at the top of the leader board in NBL National points.

Look for the Formula Factory team at the NBL Nellis national later this month and at the ABA’s Winter Nationals in Phoenix in April.