Written by  Bart de Jong
Read 3206 times
SE's product manager, Todd Lyons, was just over in Taiwan last week. That's where he snapped these photos of the remaining 200 Quadangle Looptail frames. The first 50 have been painted, stickered, and shipped. The remaining 200 are being painted right now. As you can see from the photo on the right, Todd was there right before the frames went to to painter's. Fifty frames should be available in the USA in the next few weeks. The remaining 200 should be available in a little over a month or so. 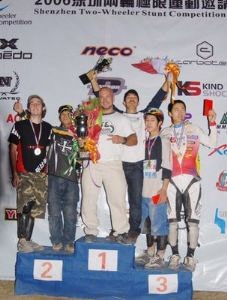 Todd Lyons is not only BIG in Europe, but he's getting HUGE in Asia. TL competed in a race all the way out in Shenzen, China last month while attending a tradeshow. Well, he didn’t just “compete,” in the race, he actually won! Jet lag will never slow this guy down.

Photo left: TL on the top of the podium in China. Mission accomplished.