Written by  Bart de Jong
Read 17620 times
Concrete parks seem to pop up everywhere these days and not only in America. Amsterdam had a fairly new one and a good one at that. It's dubbed the Marnix bowl simply because it's located on Marnix street. It's an awesome set up with just enough hips to keep you busy for ages.

It's 1,90 meters deep on one end and just a touch deeper at the very end.

The transition is pretty mellow but that makes it easy to ride for everyone. Just pumping the corners at speed doing laps or figure eights is so much fun. 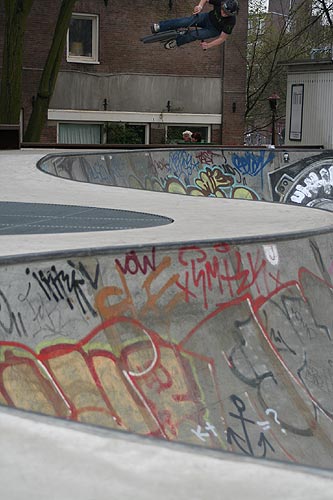 The concrete is smooth and the metal coping is placed well. It's covered in graffiti but what would you expect if you place a public park in the middle of Amsterdam.

Skateboarders and BMX-ers share the set-up along with a Golden Retriever dog who likes to drop tennis balls in the bowl. When you pick up the ball and throw it away as far as you can, the dog will run after it and drop it back into the bowl. So beware of tennis balls at the bottom before you drop in.

Carve made the design of the park and they did a good job at that. Okay, Marseille is great, but Amsterdam is closer (at least for us). The park is free (use at your own risk) and expect a tourist or two to walk by and stop to take a photo. It's Amsterdam, you know!?

Find Marnix straat in your favorite routeplanner to get some directions. If you don't have that handy, here are some directions that might help. Central Station (train). Exit on city side. Cross water. Turn right. Keep going until you hit the Marnix street. Turn left. After a couple hundred meters, the park should be on your right hand side. It's pretty hard to spot as it is sinked in the ground. Hope that helps. 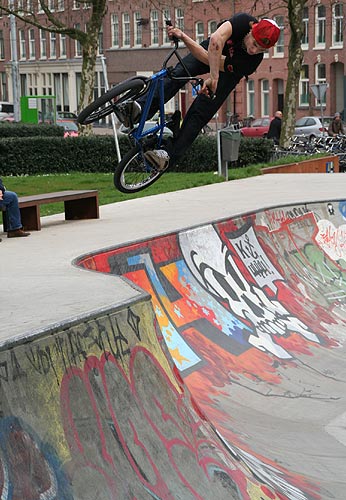 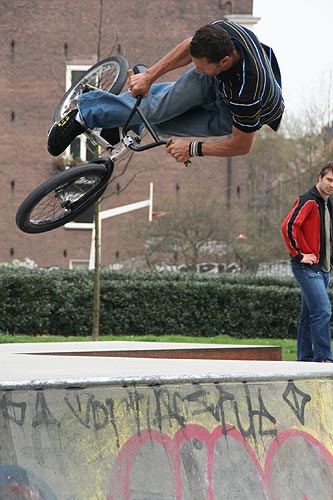 More in this category: « Skate plaze and concrete bowl/park in Hasselt, Belgium. Flatland pro Nathan Penonzek reports from Peru »
back to top