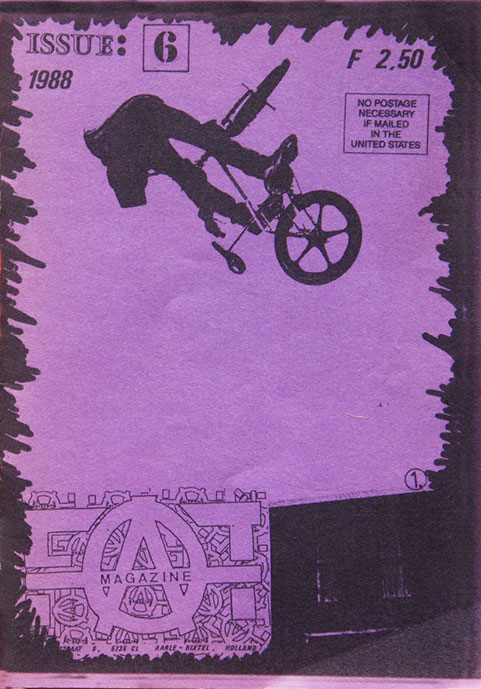 The colour of the cover changed with every issue. I sometimes checked on the cover color before Joop started photocopying but at times I couldn't be bothered and found out when the 'zines were done.

It's still 1988 and Carlo Griggs scores the cover. Jamie Cameron took the photo and 20 years later Jamie is working for Carlo over at Proper Bikes. Nice one.

The 'zine is starting to look professional with an official editorial page, contents page, and articles.

Interviews in issue 6 come from Tommy Guerrero, Dennis McCoy, Rick Allison and Robert Moeller. There's a photo of Axel Reichertz flatlanding with a fullface. Paul, Menno and I did a Coca Cola commercial and made easy money.

Frank Peeters reports about the Titus Cup, Le Clip provided the free sticker, we went to Bonn for a contest at Mathias Rechenburg's place, we cruised over to Den Haag for a sk8 contest, we visited Tropica in Germany and also discovered the banks at the University of Düsseldorf (1988!).

The Stokebros are starting to make a presence and Olli contributed a nice drawing of Alf.

Just flip through the 'zine page by page and discover something weird.