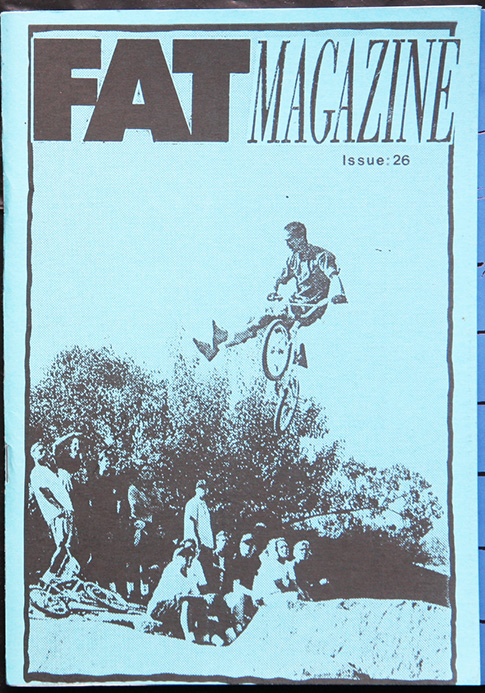 Ronnie Farmer on the cover, yeehaaw. While in San Diego we rode Mission Trails on a daily basis with the Dirt Brothers. Ronnie Farmer was one of them. He was born in East SD and the Dirtbrothers house was on the edge of that shady area. We have not heard from Ronnie in a while an really hope he is doing well. He sure knew how to stretch them no-footed cancans.

Internet sites did not bring the news back in the day, FAT-'zine did. The Believe it, or Not!? section is huge, full of news.

We traveled to Phoenix for a Bicycle Stunt contest in our 1970 Buick Estate Wagon which had a 454 engine and was hella fast. We made it over there too.

Ronnie Farmer gets a full on interview in FAT-'zine. Maybe the only interview he has ever had. Read it.

Todd Lyons scored an interview which starts on page 43. We went to an NBL national in Las Vegas with the S&M crew. Jean Paul Rogers was selling RIDE BMX magazines for some extra income at the race.

Mongoose provided the free sticker and I also went to England and checked in with a contest at the Spitalfields Old Market in London. GT provided another sticker. Free stickers are good.

While in London I also got a ride from Paul Roberts to a KOD comp at the Slough track. Read about it in this issue.

Check it out: FAT-'zine issue 26 (1993) Flip through all the pages after hitting that link.