Six years seems like ages ago. But we're still doing the same thing. Having fun on the bikes. Loads of it today at the FAT JAM and the OJA after party. Yeah!

We've lucked out so many times with the FAT-JAMs and also the 2004 version had perfect riding weather. It's pretty bad opening up an article about the weather, like I don't know where to start. In fact, the event was held months ago and so many people have asked for the FAT-JAM article that I can't wait any longer to type something up. I just finished the OJA party report which is always a big part of the FAT-JAM. If the party is right, the event was al right. Well, ready about the OJA party somewhere else. Let's go back to the Sugar Hills, once again the venue of the FAT-JAM. 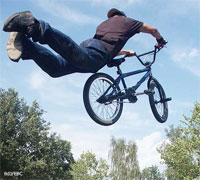 Because of lack of international promotion (on purpose), the event has become a fairly local affair. We're always happy to see our brothers and sisters from Leverkusen and Cologne and thanks again for coming over this year. Saturday had a non-stop dirt session on the trails. Two main lines were actually rideable and those ripping were Daniel, Dennis Schep, Michael v.d. Lee and also a bunch of BMX racers. Everyone else was happy to make it through the sets and throw in a trick or two but the big stuff came from the D, D and Lee. With a constant 20 rider line up at the starting hill, the session was a good one. 50 more riders and it would have been too crowded. It was chillin' to your willin' mixed with riding all day long. 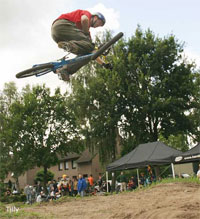 Sunday was announced as the FATBMX Olympig Gaymes. With the real Olympigs going on in Athens at the same time and talk about BMX/Freestyle becoming an Olympic event in the future, we had the first test in Aarle-Rixtel. The arrival of the Olympic fire turned into a big disaster. The torch (a piece of wood) was dumped into petrol to make it burn. When our lucky torch carrier moved his way to the Olympic stadium, the petrol started dripping on his hand. Next thing you know his whole hand was on fire. Ouch! The Olympic BMX fire was passed on to the back up runner who made it to the fireplace no problem. The official opening ceremony was hot! The 4 disciplines consisted of: 1) Throw 5 forks in a shopping cart that's 10 meters away. 2) Throw 5 tires on 5 pylons and form Olympig rings 3) Throw bmx frame as far as you can 4) Hang onto frame as long as possible 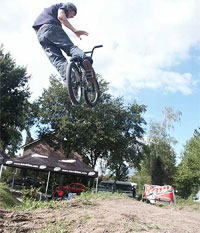 Everyone could enter the Gaymes so no qualifying was necessary. In the end it was Dave to the Rescue who won the Gold medal and some goodies from the sponsors such as Eastpak, Vans, UGP, Paul's Boutique, Fa. Koppenens, Kwalitaria. Silver went to Aarle-Rixtel FAT-JAM OJA local Zyan. Bronze was a tie between Paul de Jong and Riccardo Moes. To decide who got the Bronze it was decided that both of them would hang on the soccer goal and the person who stayed on longest would get the medal and the goodies. A very professional way to determine who gets a medal and who goes home empty handed. With some serious heckling from the crowd it was still Paul who won the bronze. While the Olympics were going on, the trails were shredded by all types of people with a BMX. A photo session followed with Tilly trying out his new digi camera, Peter Fastenroth taking care of the Beware report and Bartman taking enough pictures to go along with this report before hopping back on the bike again to ride some more. Days like these don't happen every day. Lots of riders at the trails, some music, a bunch of camera's, a good crowd and some sunshine. What more can you ask for. Lucky us. BdJ Click here for more pictures on this article.