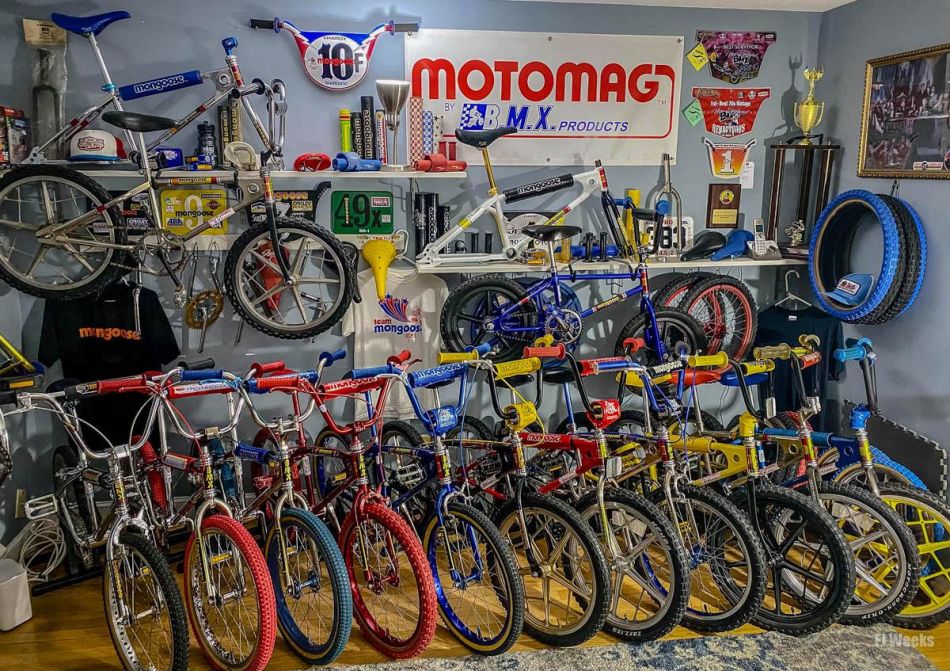 Have you been a Mongoose fan from the start?
FJ Weeks: Well yes, started out w/ a hand me down spray bombed Huffy. I got my first Mongoose Supergoose in 1981 which is still w/ me today.

What's the story behind the Racer's bike? 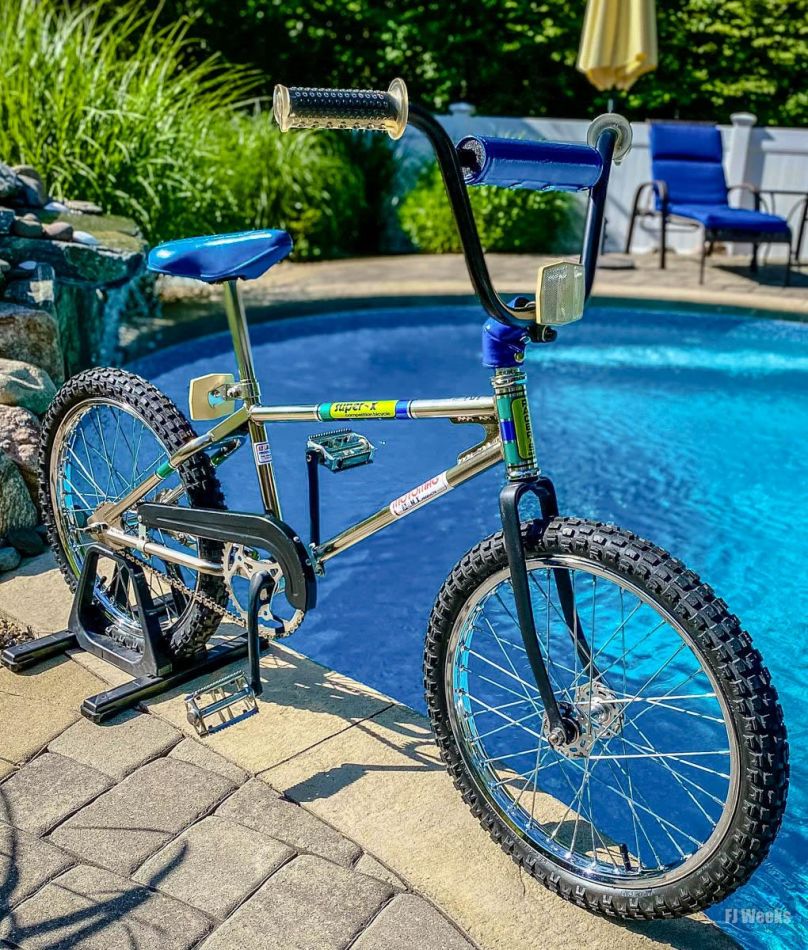 FJ Weeks: It’s a fairly new to my collection. I purchased the frame only. These kind of frames/bikes are mostly passed from collector to collector and rarely seen on the open market for sale. I was fortunate enough to become friends w/ a really great and generous guy Richard Coolidge aka ‘Rick Cool’ who has passed down to me a few rare ones from his collection.

Any guess how rare that bike is?
FJ Weeks: There are only 4 or 5 on the bmxmuseum site. I’m sure there are a lot more out there. It’s definitely a grail bike in the ‘Bmx Products INC’ circle. 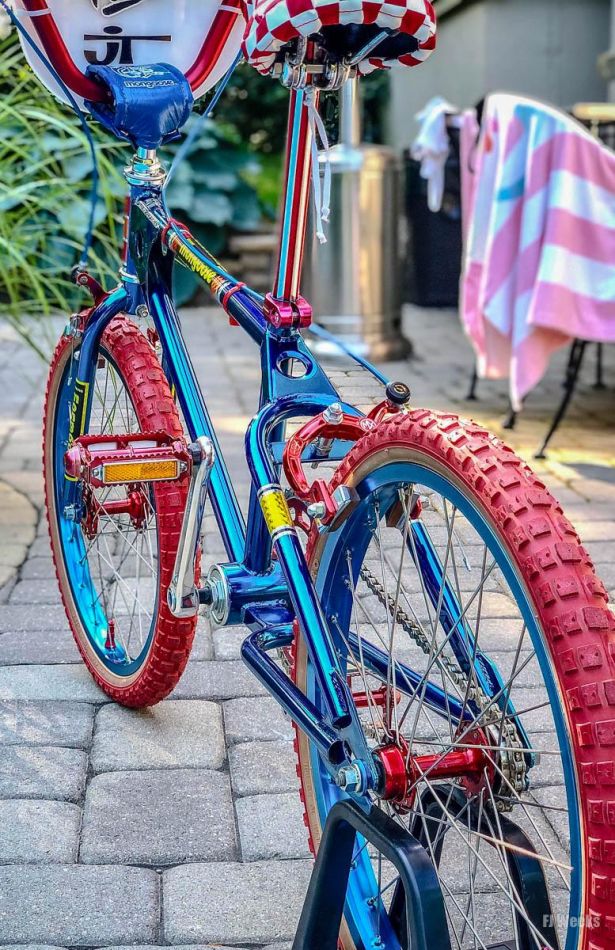 When you hunt for BMX stuff, is it basically products that you have a feeling with? For instance parts that you could not get/afford when you were younger?
FJ Weeks: Absolutely. When I have an idea for a build it’s usually a combination of 3-4 bikes I admire and I put my own spin on it. I didn’t alter my childhood Supergoose much at all, It was custom when I got it new. I brought it to a more catalog spec build after getting into it again.

Do you believe your hobby has gotten out of hand a little?
FJ Weeks: Yes definitely. Covid didn’t help this in my opinion. I believe it’s mainly due to the sellers who are just in it for the money and saw an opportunity to cash in if you will. 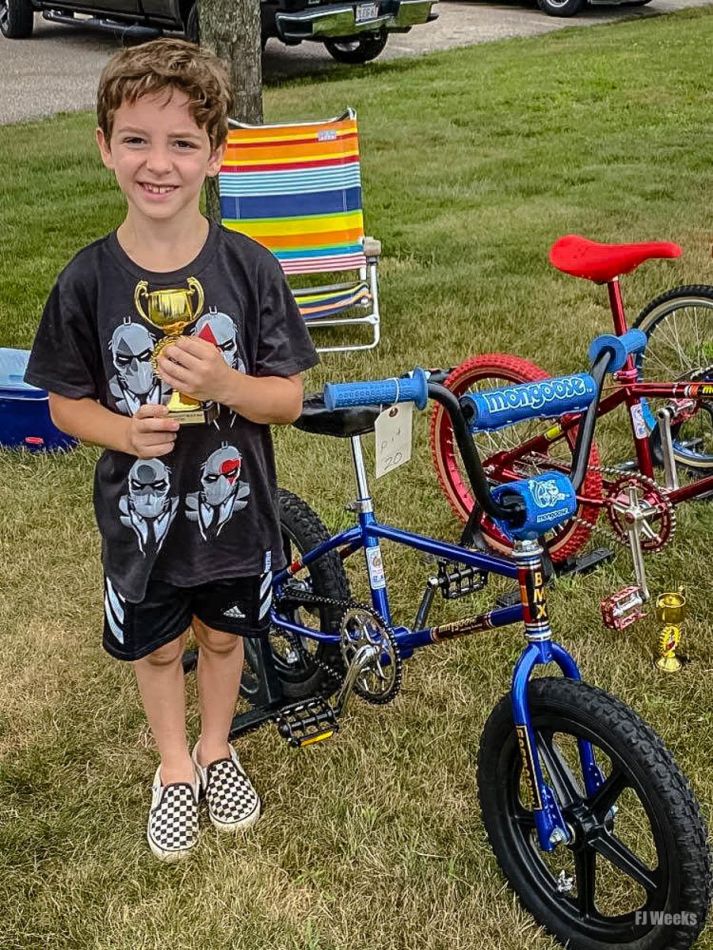 Do you like Pit Bikes just as much as 20 inch BMX bikes?
FJ Weeks: No, the 20” BMX’s are my true passion right now.

Do you repaint yourself?
FJ Weeks: No, I have them done locally by professionals. I’ve only had frames and a couple sets of Motomags done. I’ve never had anything re-chromed or re-gold plated before. I try and buy original stuff in really good shape and a bit of elbow grease and polish I have them looking newish again. In person up close it really adds some character to the the builds.

Have you built up a bike in your collection specifically based on one photo (of a rider that you admired)? 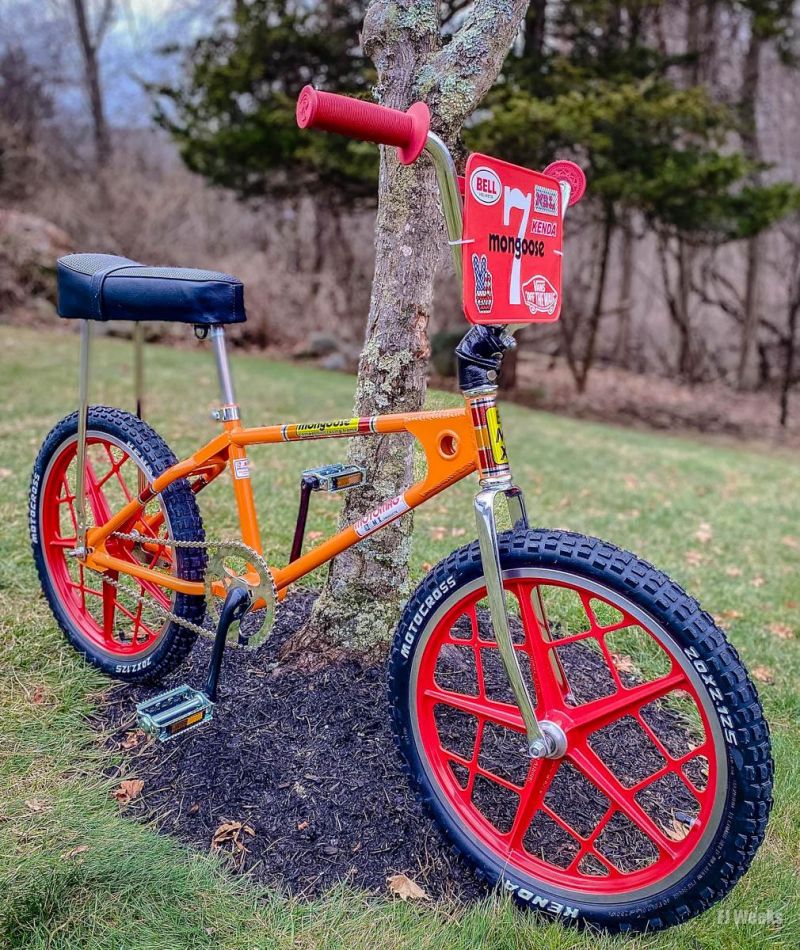 FJ Weeks: Oh sure, I do customs a lot but I do try to replicate some of the catalog pics I see quite often. Nothing better to hear than a stranger tell you “that’s the exact same bike I had as a kid”

Do you collect BMX gear and number plates as well?
FJ Weeks: Yes, not really anything I don’t use though or have used. I’ll end up doing a custom build using certain parts, pads or plates etc. and get tired of it and bring it down to a more catalog look leaving me with some extra collectible parts here and there.

What BMX Oldskool shows do you try to visit each year?
FJ Weeks: All the ones local to me in Massachusetts, RI and Conn. I'd like to venture out of New England more eventually and do some road trips. 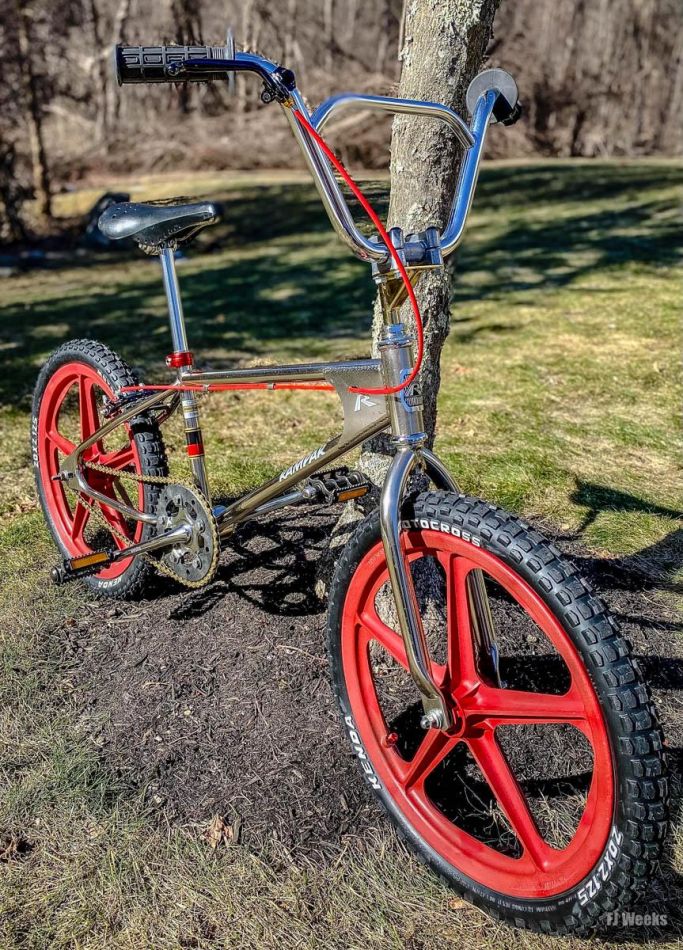 Do you think a National/International BMX museum is something that could work?
FJ Weeks: Yes. I do think it would have to be somewhere that other attractions are around that area, so then you’re able to plan a family trip and you get to go to a BMX museum at the same time.

Do you ever take out your bikes to show them to people?
FJ Weeks: Oh yeah. I do have a ‘bike room’. When some of my non BMX friends or family visit we always end up in there at some point. They all know I collect BMX from conversations and pics but when they actually see the bikes in person the look on their face is truly priceless when they enter the room. I do a lot of casual riding with my 7yr old son and have my daily Mongoose rider but will take out a bike and ride it a few times then put it back and won't touch it again for another year. When I ride these more pretty ones it’s really cool how strangers yell out the car window, stop us on bike paths and tell me their own story of the Mongoose bike they had, wanted or the friend had. 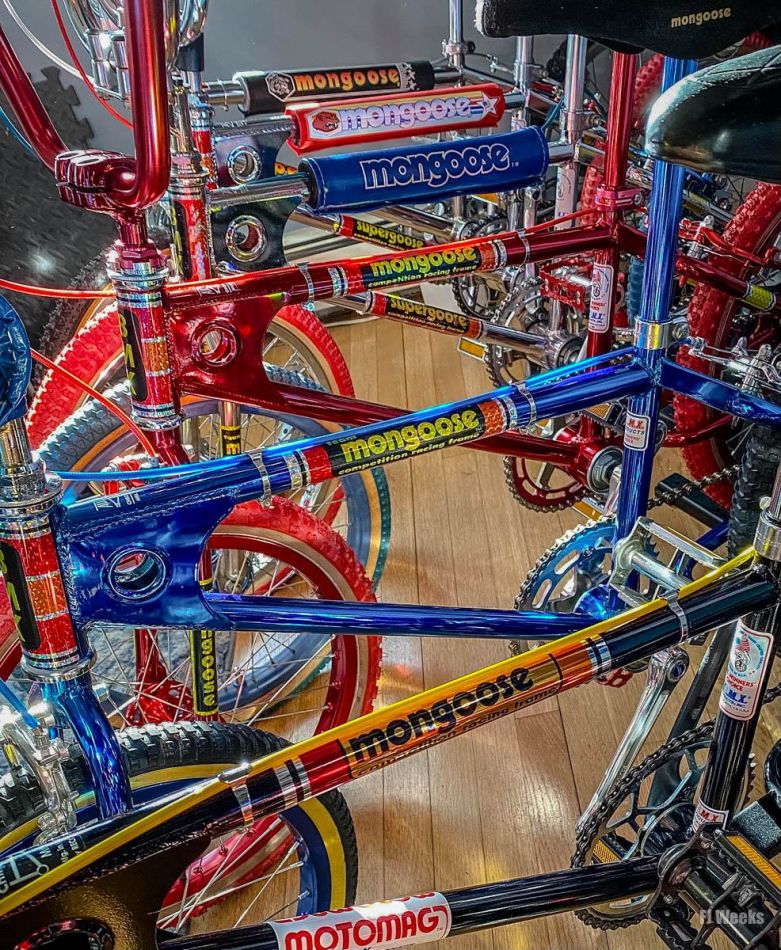 Every bike has a story. What’s the best story you have on a bike that you have in your collection?
FJ Weeks: I’d say it would have to be my childhood '81 Supergoose. It’s not the best or prettiest one in my collection. For my birthday I got a birthday card and a cut out picture of a Huffy, a blue and gold BMX bike, it was one of those ones on the grip you can shift gears, Z something? Told my mom I didn’t want that bike. We were poor as she worked two and three jobs I think that disappointed her as the Supergoose was three times the money. My dad said he would get me the bike I wanted. I received my Supergoose a year later on my next birthday. It means a lot to me. When I moved out at 18 and went to college I took it with me. I was kind of a partier and vagabond in my 20s and 30s, me and Jack Daniels got along real good and had several apartments in my day. I honestly don’t know how I kept it. 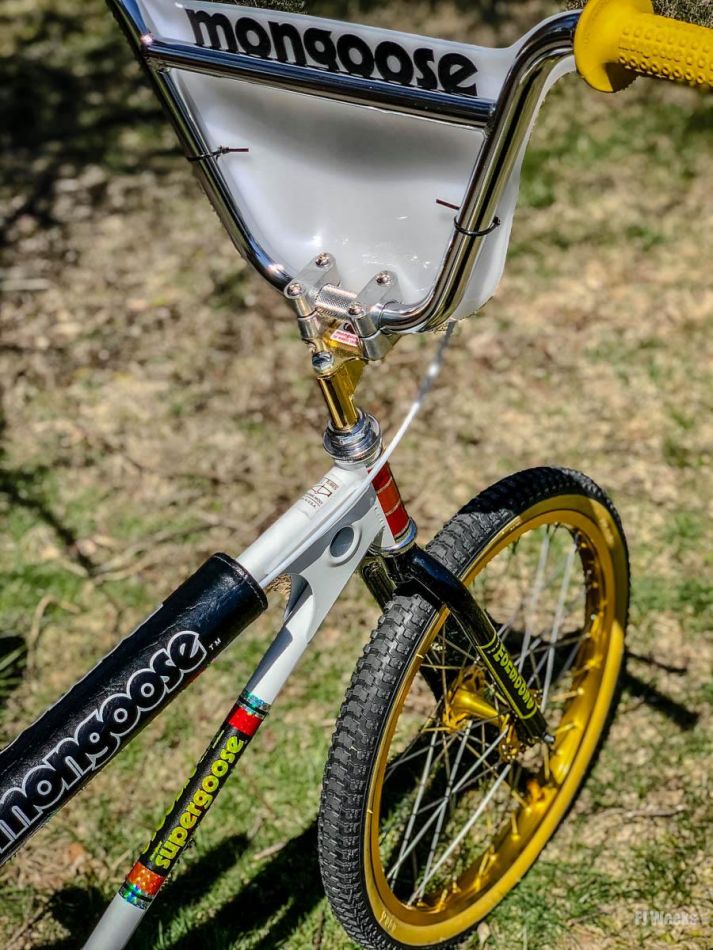 When my son started to ride a bike at 3 years old I has been riding a Redline Romp 2000s I think? A tenant had left it at one of my properties. I said to myself I want to ride ‘my bike’ I pulled it out of my basement, cleaned it up and joined a few Mongoose groups on Facebook and here we are. Lol

What bike/part have you been looking for and haven’t been able to find?
FJ Weeks: A 1975 Mongoose Motomag’ and a BMX products ‘moto-trac’. A red minty first gen Tuff Neck for my team Rampar.

Where can people contact you if they have that product in the shed and want to make your day by sending it to you?
FJ Weeks: Facebook, FB messenger. My ph # is listed on there too or join ‘old school BMX Mongoose owners’ group on Facebook that I help manage.

Thanks to?
FJ Weeks: Keneth Vega Velazquez, Brad Nash, Richard Coolidge ,Warren Eales, Gary Mallia, Ross Rasby, the builds and collections these guys have and the look of the bikes they did inspire me and still inspire me so much. The help, encouragement, praise, generosity and friendship from them pumped me up big time and sent me on my own path. Many others 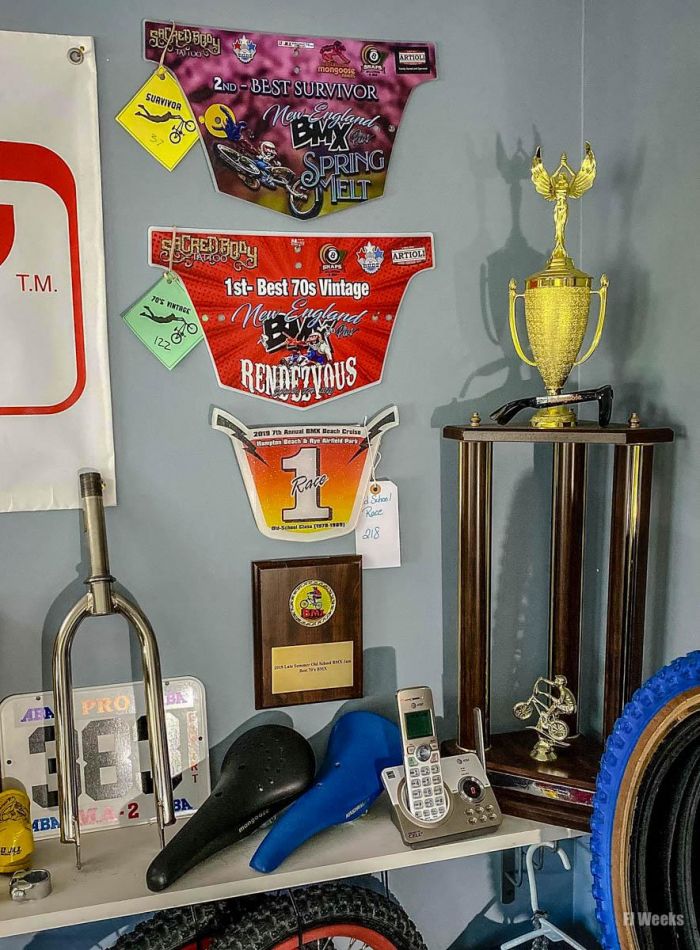 have influenced me also, too many to list. Random strangers and group members on Facebook who give me compliments and private message me heartfelt messages. My wife for always encouraging me and never blowing me shit for how much money BMX things cost lol. 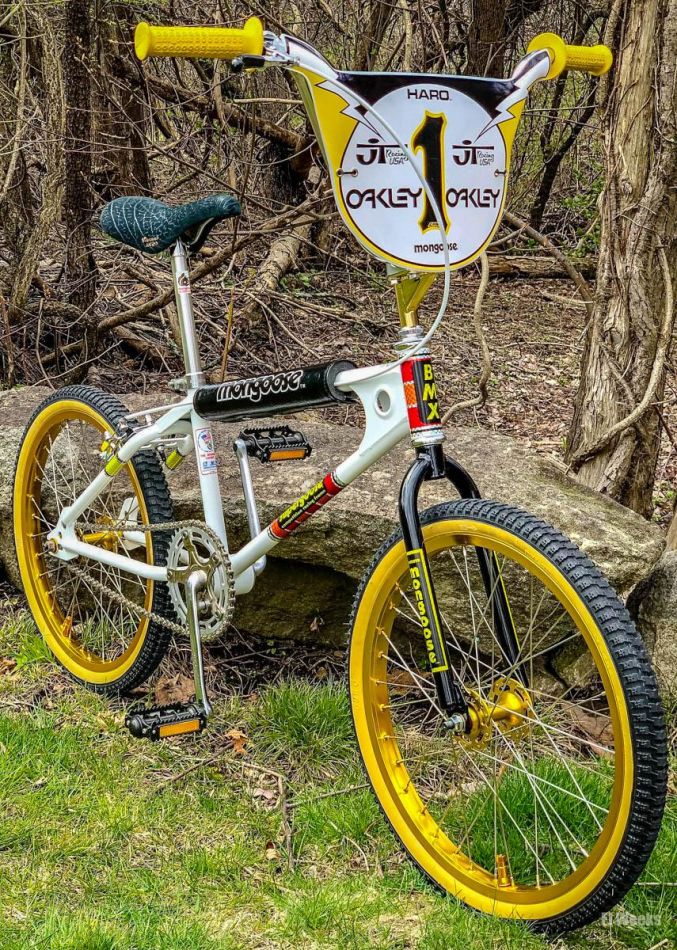 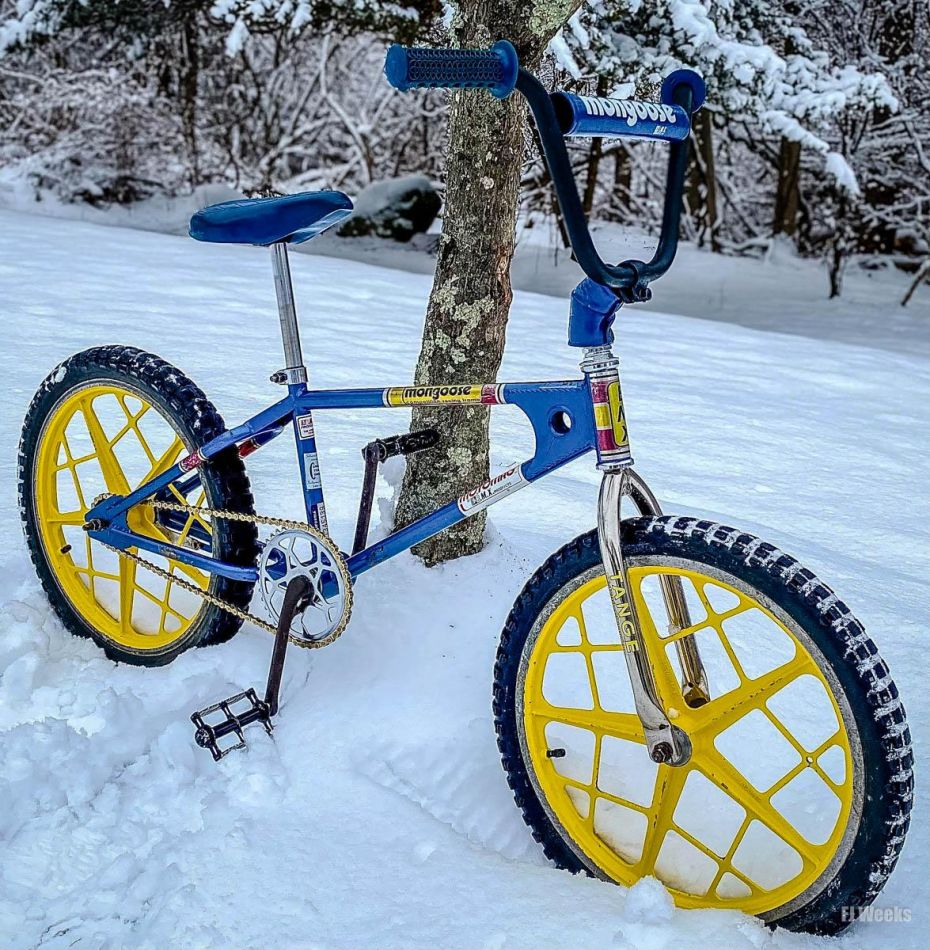 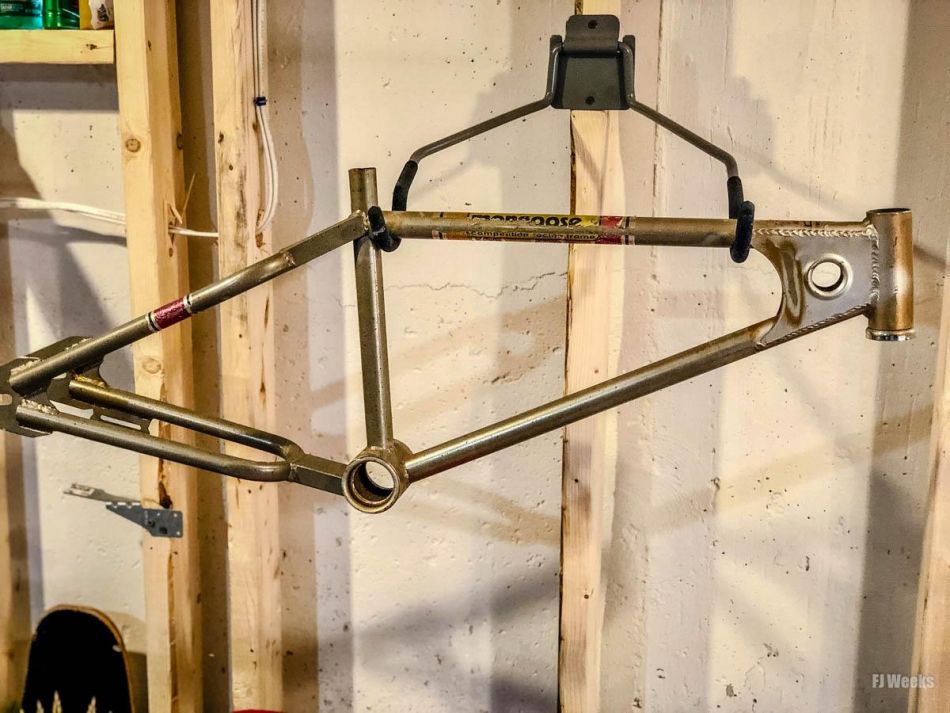 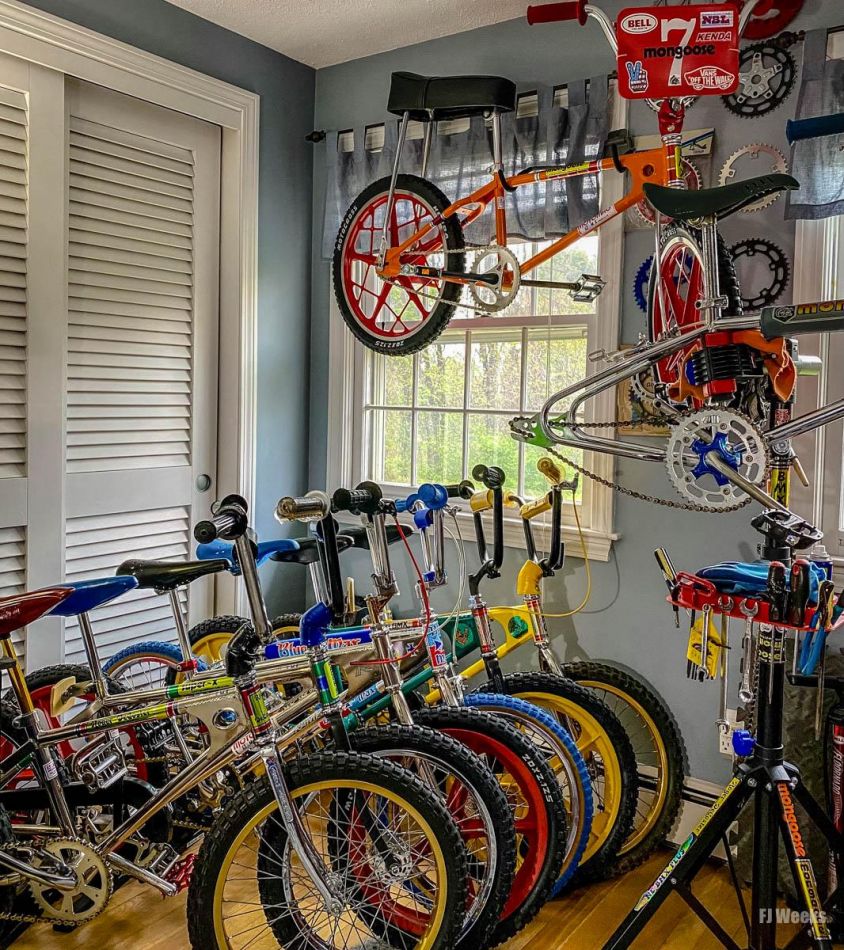 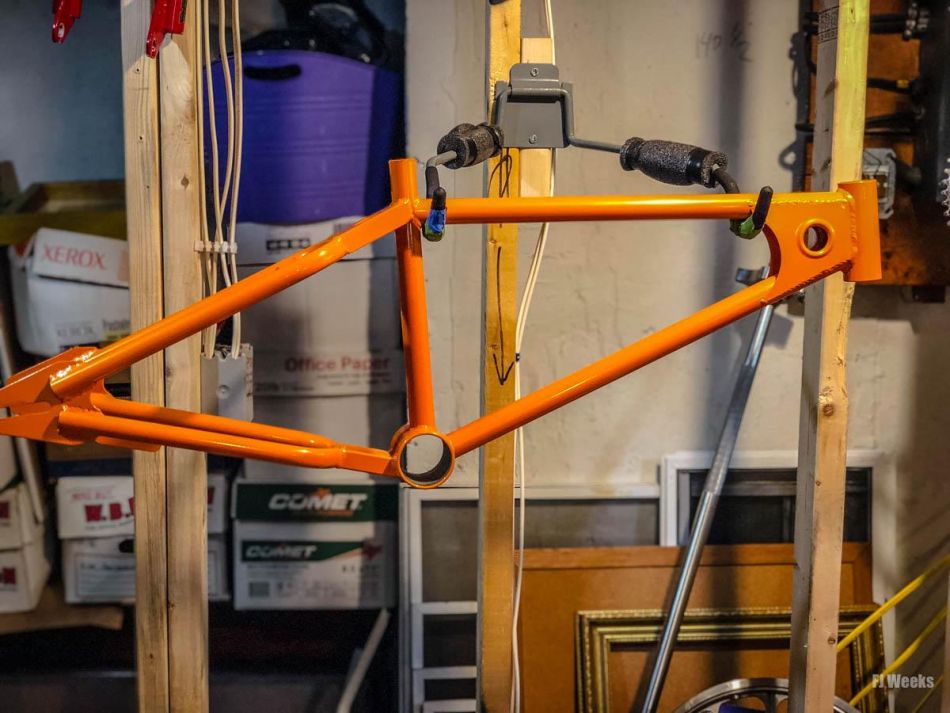