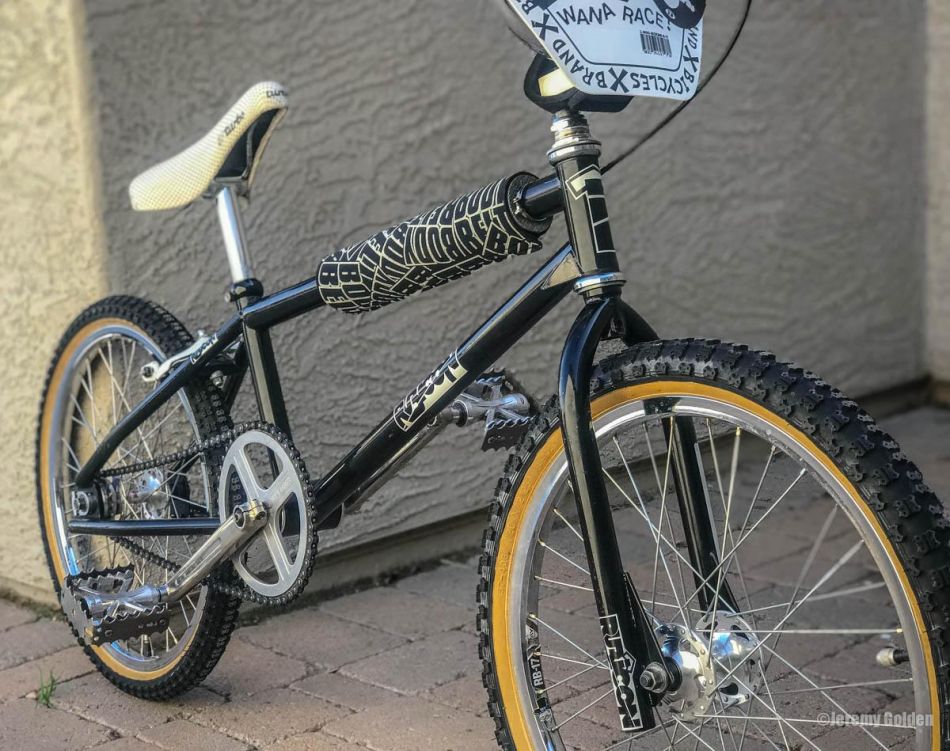 Name: Jeremy Golden (Goldie)
Hometown: Raised in SoCal made the move to AZ in 2001
Started riding BMX in: Started in 1984
Number of bikes in the collection: 12 completes, almost enough parts for 6 more.

Do you remember the moment that you decided to start collecting BMX memorabilia?
Jeremy Golden: I started collecting right around 2004. I built my Hawk f-20 that I had since the end of 91 for my son to ride and after he was done riding it there was a few parts missing and I wanted to build it back up. I then realized there was a collector’s market when searching for parts and that spurred my desire to search for the other bikes I was enamored by as a kid. 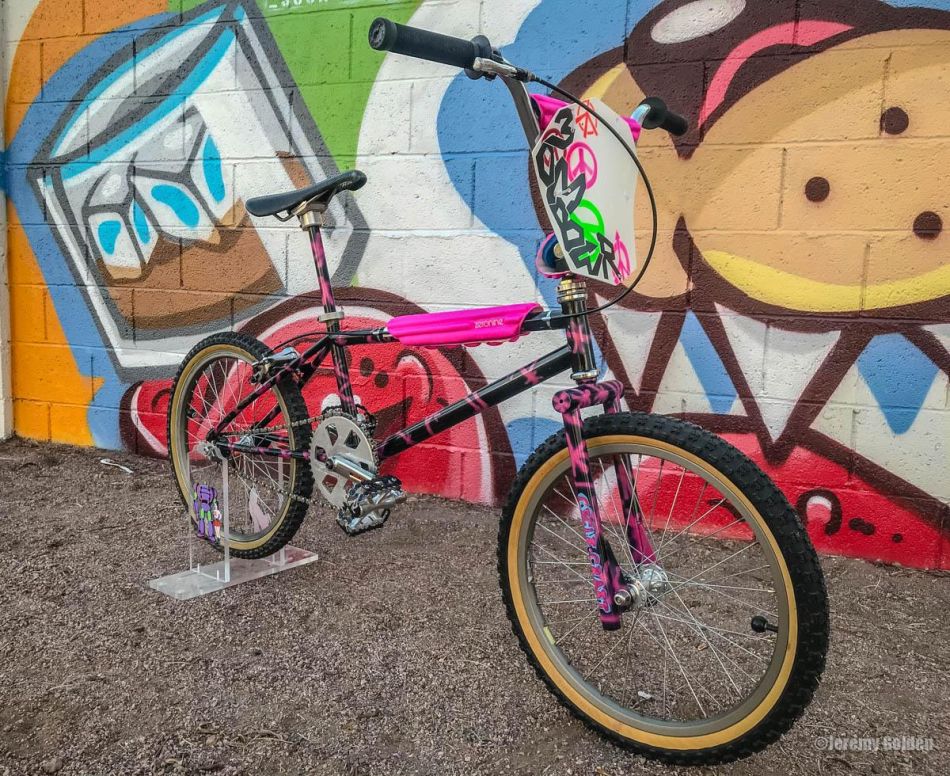 What kind of bikes do you focus on?
Jeremy Golden: I’m mainly a late 80’s-early 90’s race guy as those were my fondest memories but I appreciate all those that paved the way before then and the ones that improved the design of BMX bikes after.

Do you have a favourite BMX brand?
Jeremy Golden: I don’t think I could ever choose a favorite brand with so many awesome ones to pick from. The early 90’s had some really unique designs, JAD, PMC, VG being amongst a few of my favorites. I do have a special place in my heart for Redline Flight 401’s though, they lasted the test of time. 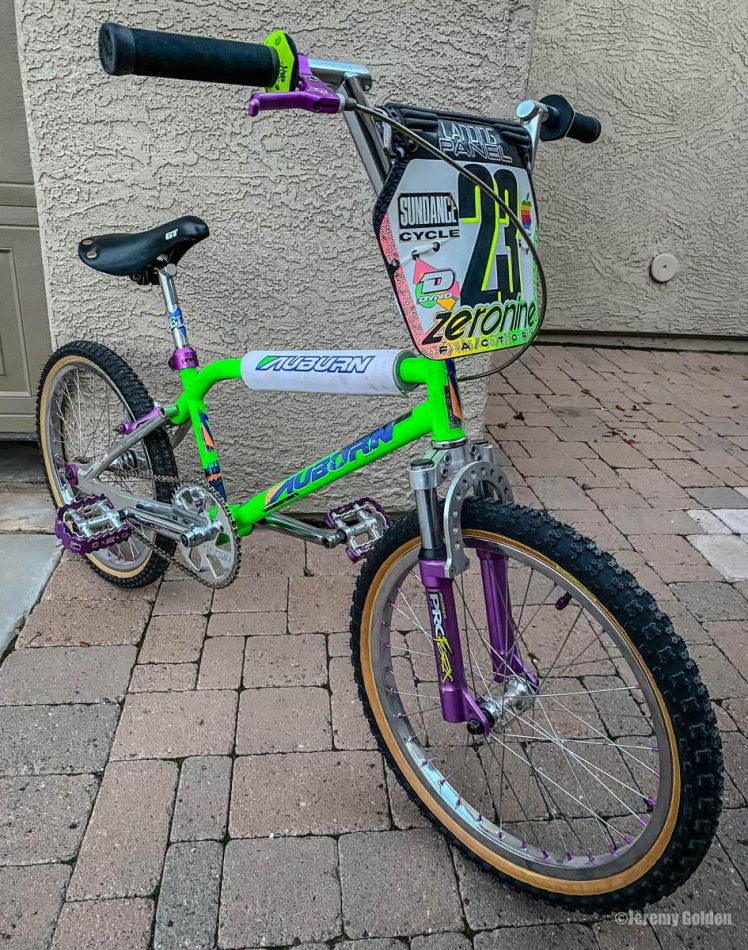 The green Auburn with purple Pro Forx. What's the story of that bike?
Jeremy Golden: The green Auburn was definitely a special one for me as it was the final one of my top 3 grails I had been hunting since I started collecting. I honestly never thought I would be lucky enough to have one in my collection. Special thanks to Kyle Huffman for selling me the bike that he had held on to since he was a kid. It looked a lot different when I purchased it then it does now. I collected almost all the parts I wanted for it prior to ever owning the frame. I told Kyle about 5 years ago that if he ever considered selling it I would love to add it to my collection. Just last year Kyle contacted me and told me he wanted to see what I could do with it, it’s exactly how I would have wanted it 1992 now. Most of the purple parts including the ProForx were from a local GT Pro Series purchase that I scored years back.

How did you end up with the Kastan forks in your possession? Is that where this bike started?
Jeremy Golden: The Kastan forks came from a lot that I had purchased locally from a friend Daniel Easton. The lot included a 88 Free Agent 24”, 92 Kastan Proline Stretch, 89 Kastan KEX jr cruiser, and the elusive 91 Kastan KEX Pro S. He had Titron pedals on the Kastan Proline that I had to sell immediately to make sure I could pay the bills after that purchase but boy I wish I could have kept those. 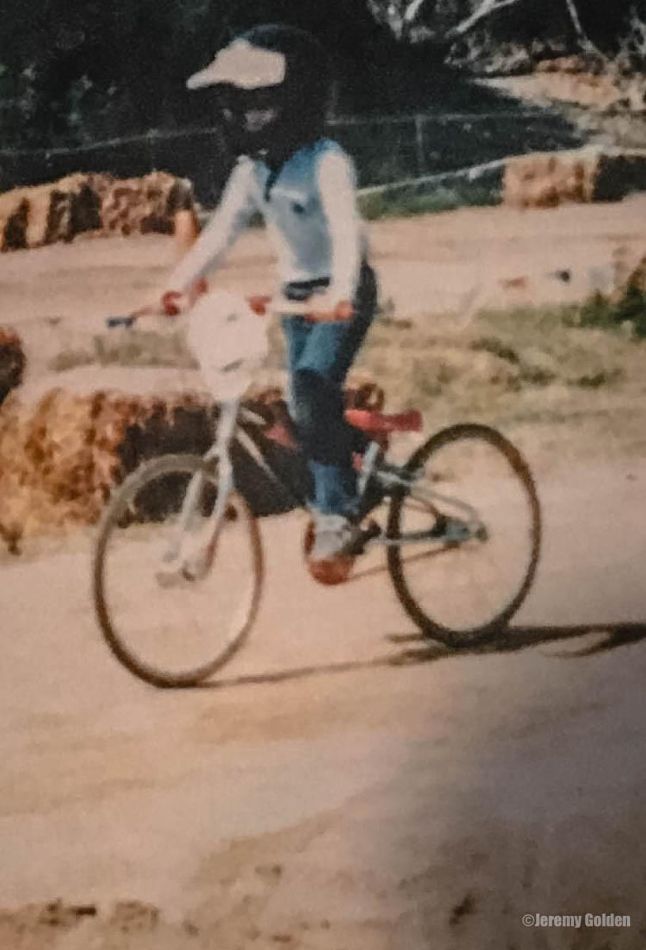 When you started riding, what bike was the dream bike for you?
Jeremy Golden: When I started racing in 84 I was only 6 years old so I didn’t have a dream bike at that time but I was racing a JMC mini so it didn’t get much better than that. My father passed away shortly after and I took a few years away from the sport. When I came back to racing in 1990 I had a few on my dream list, Hawk, Kastan and Auburn were at the top of my list.

The BOSS bike, inspired by Steve Veltman?
Jeremy Golden: The Boss is actually in pieces now. I built it up with all the parts I had saved hoping an Auburn would fall into my hands. Two years after I built it the Auburn came into my possession so the Boss is on the back burner now. I’ve got some good plans and parts for how it’s gonna be built again in the future though. 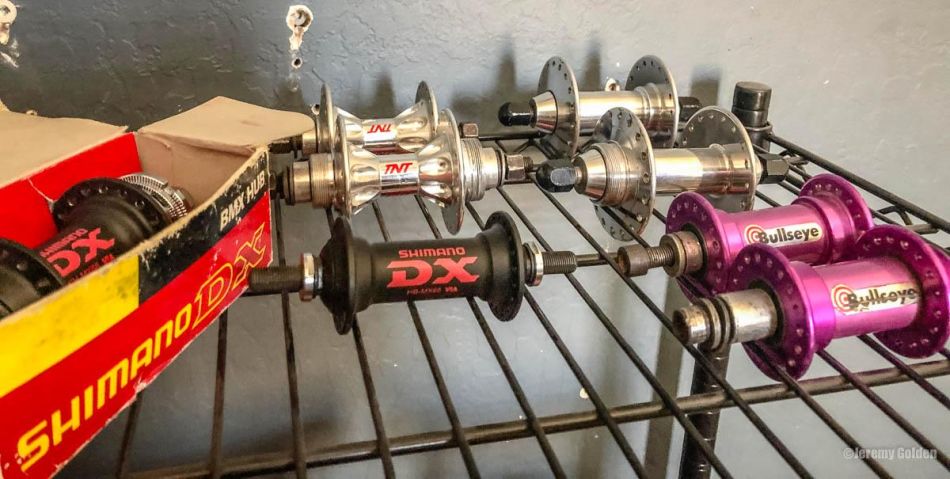 I could name the top guys in the hobby like Haney or Chad Powers but I’m gonna go with some names not so known to this list that either inspired me or I just really enjoyed their collections.
1 -AJ Wilson (Huge 90’s collection)
2 -Brett Kimble RIP buddy you had some of the most tasteful collection I’ve ever seen
3 -Greg Tidey (might not the largest collection but the bikes he owns are something seriously special) 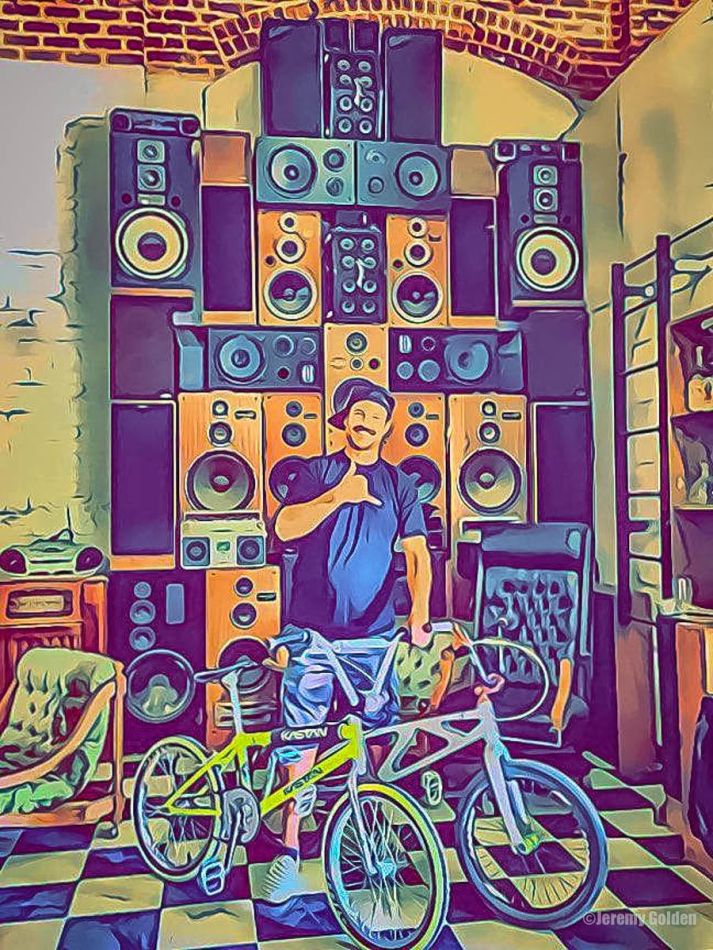 What products are a great help when you find an old rusty historical piece of shit bike that needs to shine again?
Jeremy Golden: I’m a bit of a purist so I don’t really do much restoration unless completely necessary although I did venture in painting a couple bikes recently. I even tried airbrushing some Cyclecraft Dirt Legz to match an original paint frame recently. I’ve had success with a few OA baths removing rust from chrome but for the most part I let other people take on those types of restorations. I’m more of a dawn dish soap and water to clean and with some Lucas Oil Red n Tacky grease for the parts requiring lube. One little secret I’ll share is to apply a thin layer of wax on your brake cable=game changer

What's the story behind Rubicon?
Jeremy Golden: The Rubicon is actually from a local builder here in AZ, Woody Woodruff. Some of his designs include Works Development, Enigma, Rubicon and his earliest design was the Direct Link. He’s possibly the best bike manufacturer and isn’t a household name. I purchased the frame from Shannon Gillette who sold it for Woody and built it up to what it is now. Gotta thank my boy Stephen Arndt for hooking me up with the last piece of the puzzle with the NOS Body Belt pads. 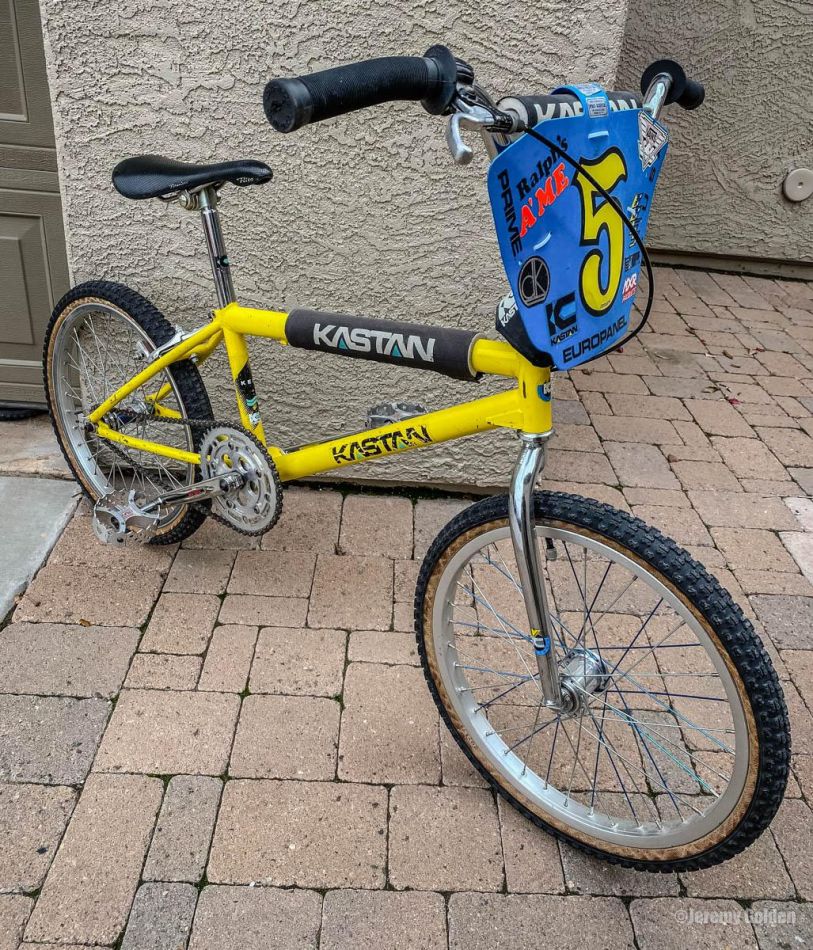 How often do you look on eBay/Craigslist/BMX Museum to shop for old BMX stuff?
Jeremy Golden: I haven’t been doing much shopping lately other than grabbing a few things that pop up BIN on my saved EBay searches. With so many collectors entering the market over the last couple years it’s become hard to financially compete and the stuff I still want ain’t cheap. 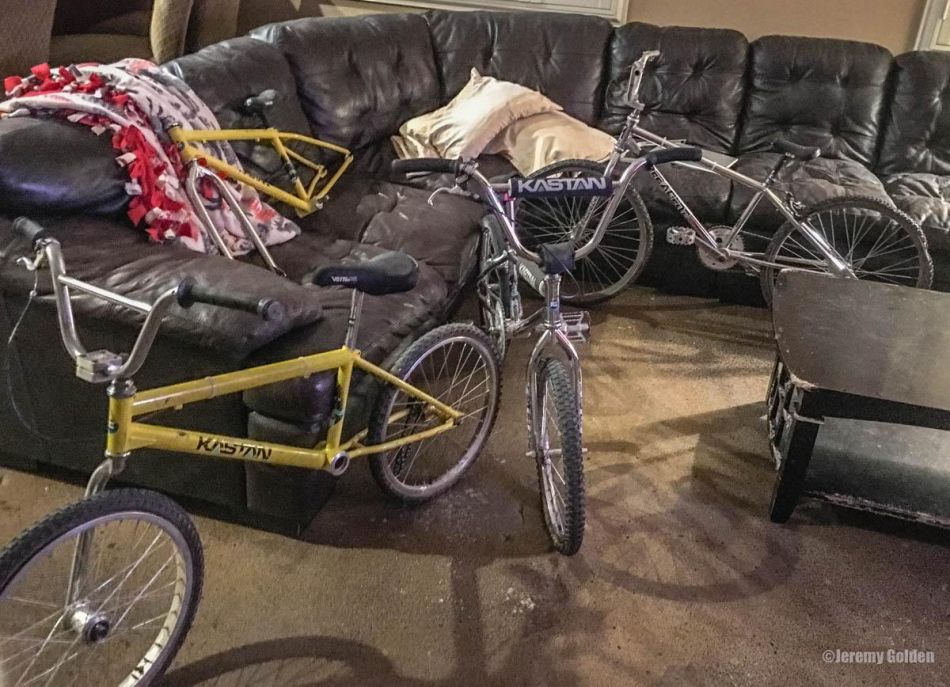 Do you have a man-cave where your bikes are displayed?
Jeremy Golden: My man cave has been currently under construction for like 5 years haha. It looks good for a couple weeks them becomes a complete disaster whenever I start building bikes or taking them apart.

Do you always have room for "one more bike"? What will it be?
Jeremy Golden: I can always make room for the right “one more bike”. It will probably be a JMC mini to replicate my first BMX bike. 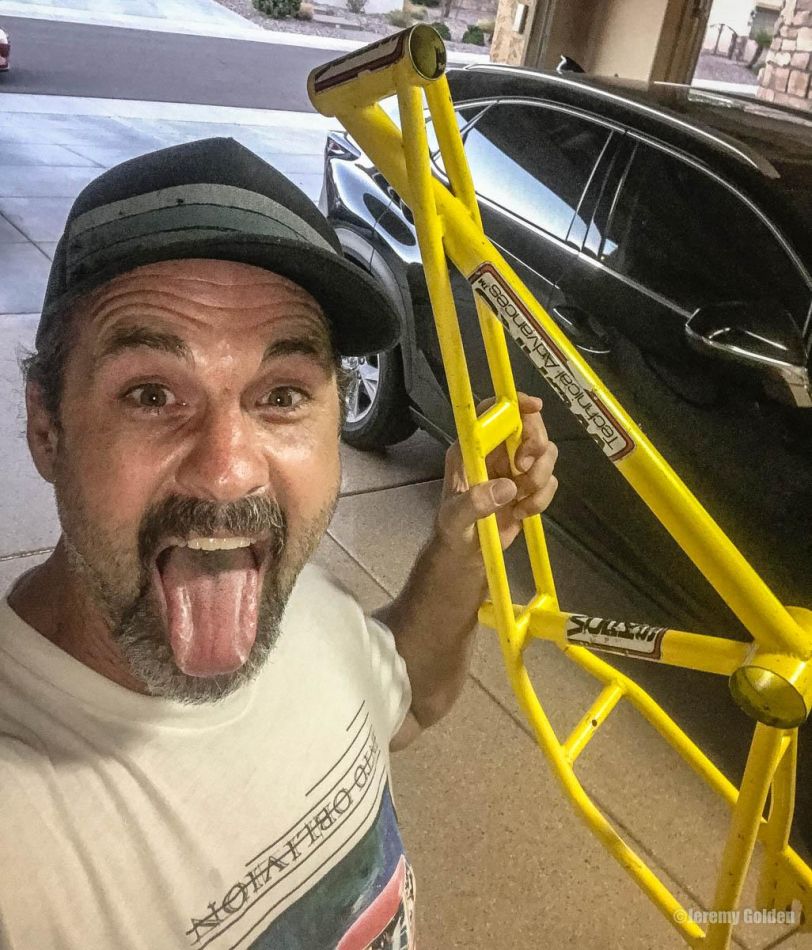 What's a bike (part) you have been looking for but haven't been able to locate?
Jeremy Golden: I’m still looking for a few bikes but for the most part I own the ones I really wanted. I wouldn’t mind if a first generation Haro Monocoque 92-93 or Haro Group 1 Composite or possibly a Hyper HPR 20 2 piece fell into my hands. I would also love to own a VDC Changa long, RRS or maybe a JMC 24”. I could use some blue Hyper hubs also. Put it this way, there is still a lot of grails out there I would love to own but most of them either never come up for sale or someone else is willing to pay more.

Where can people reach you when they have that part available?
Jeremy Golden: Most likely I’ll find you if you have what I want lol but per chance I don’t I can be reached on FB and on the BMXmuseum.com page under the alias “The Hawk f-20”

Thanks to: Special thanks to all those that helped contribute to my builds. I know many times I’ve run into situations where friends I’ve met along the way of collecting that could have sold something for much more than I paid for the item but they chose me over the money knowing I would try my hardest to do something special with it. Without those guys this interview wouldn’t exist. 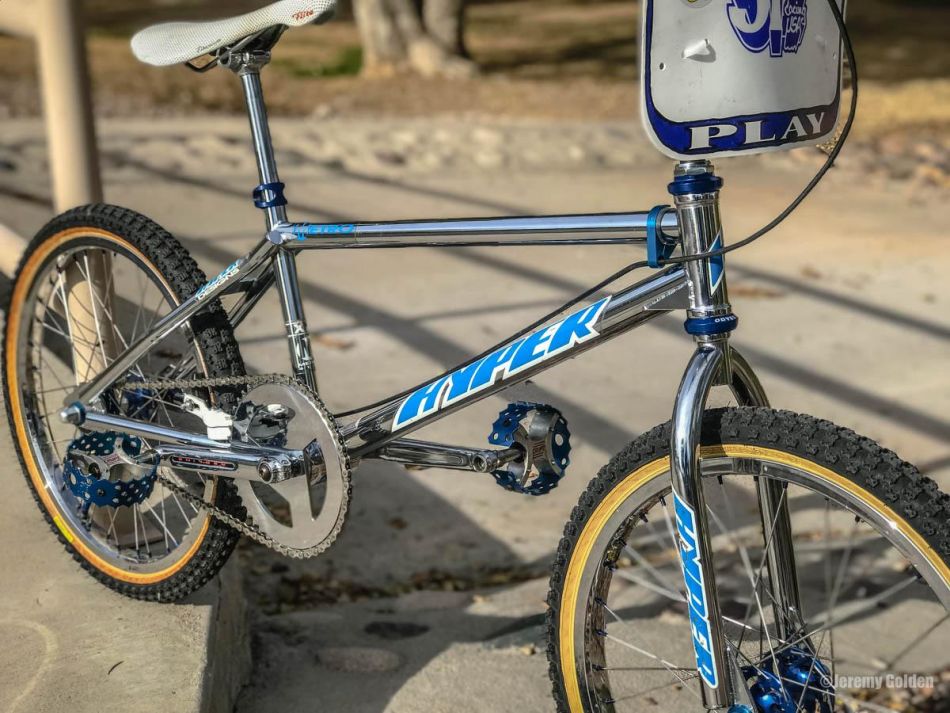 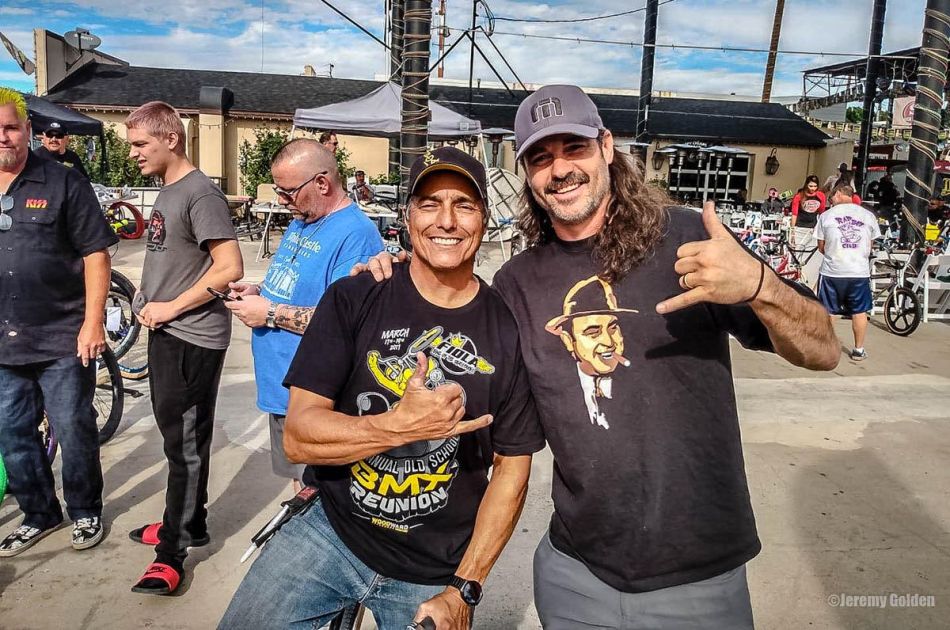 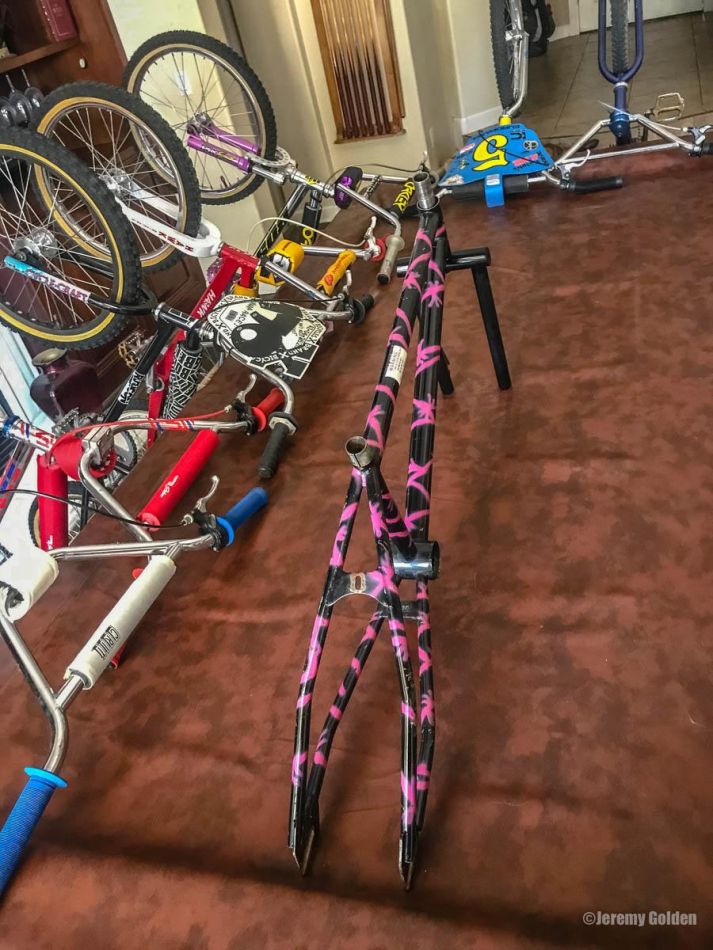 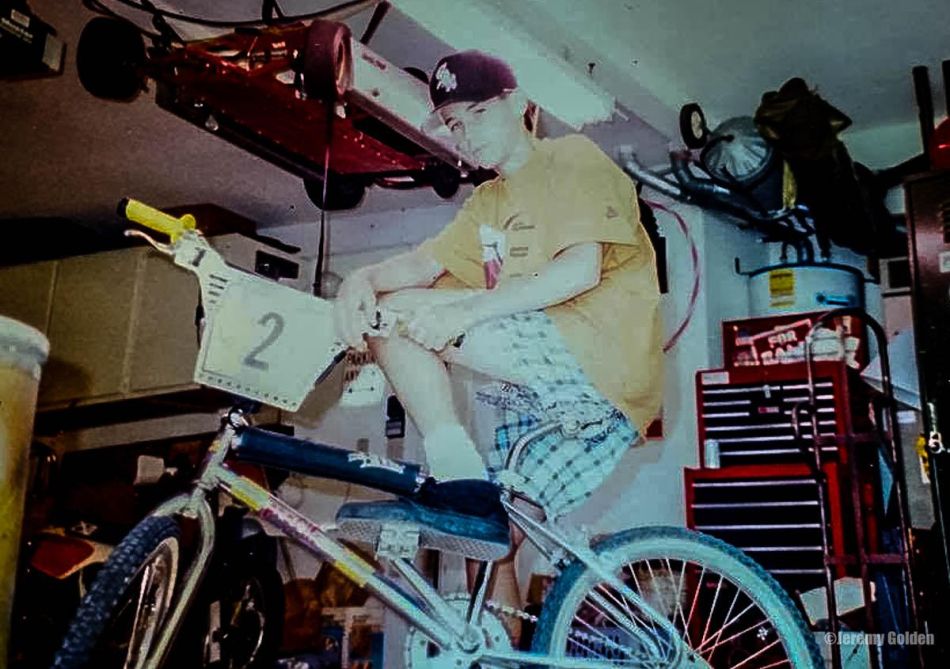 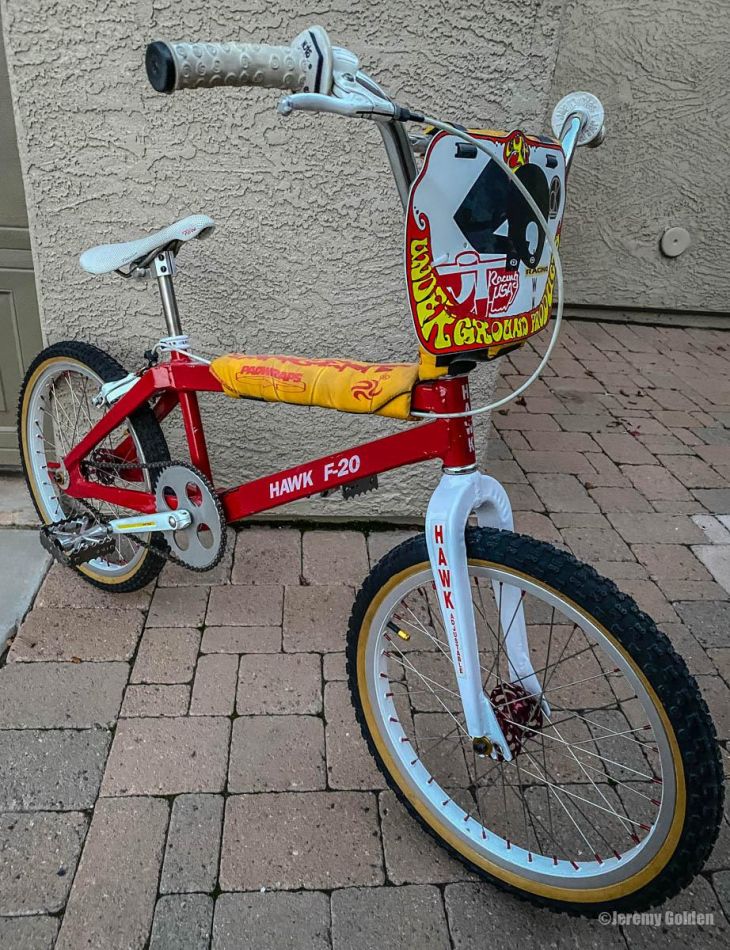 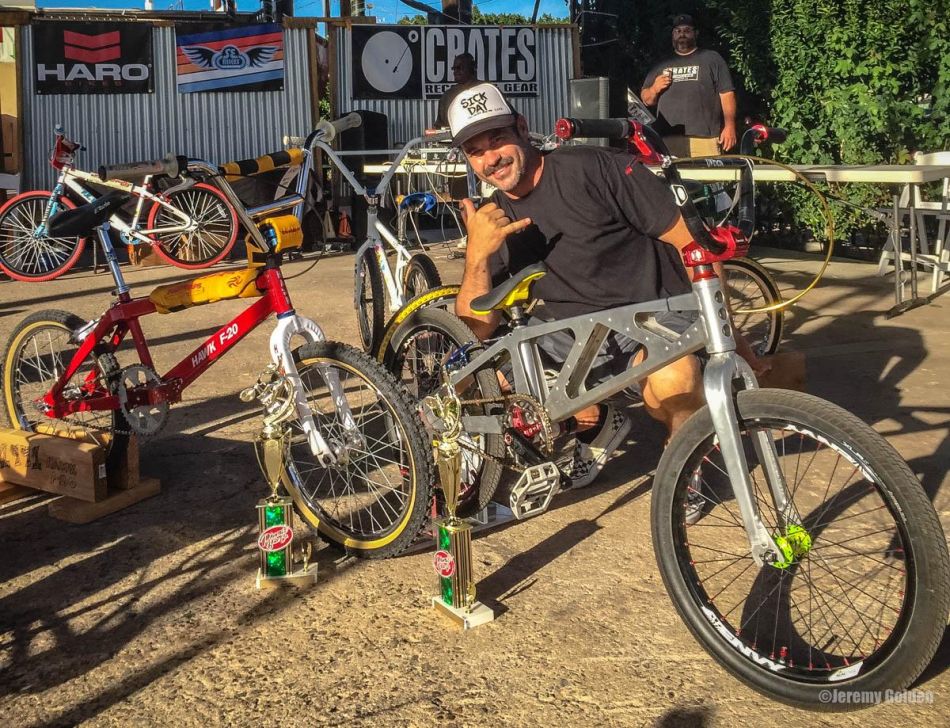 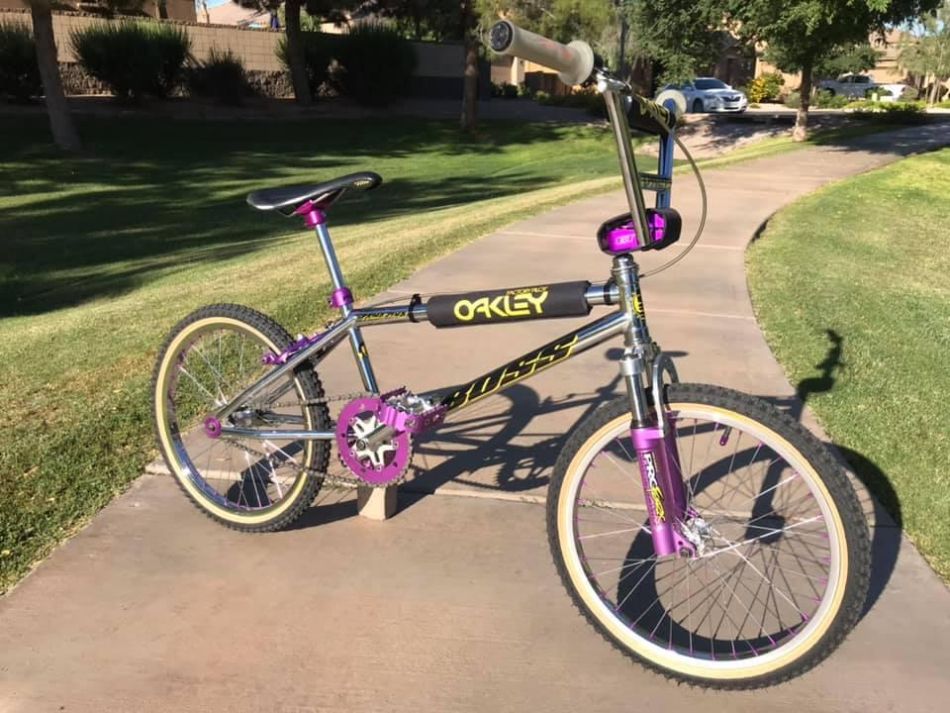 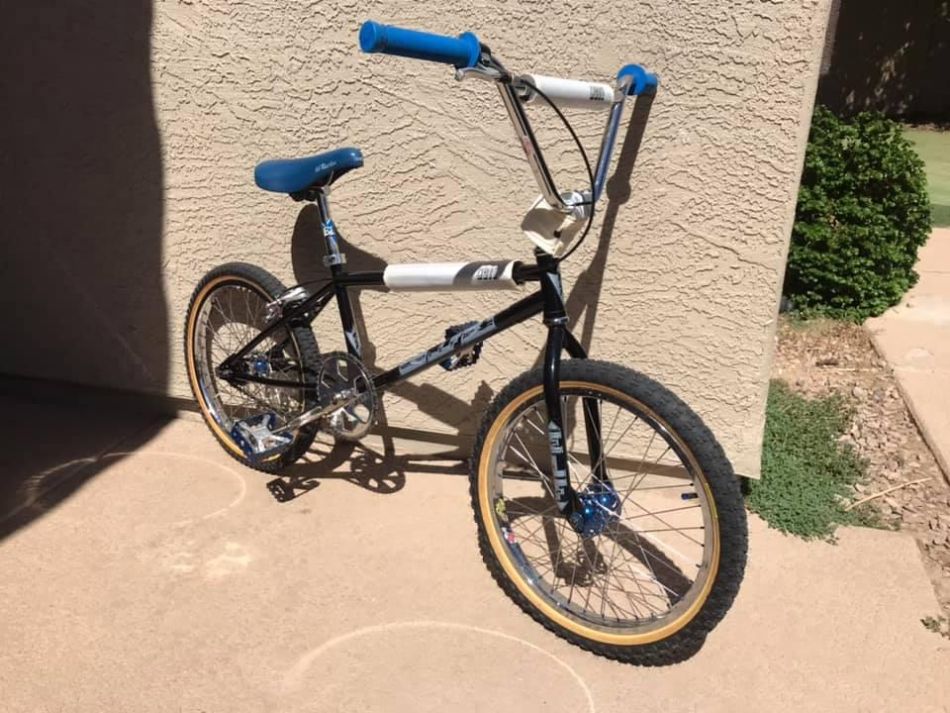 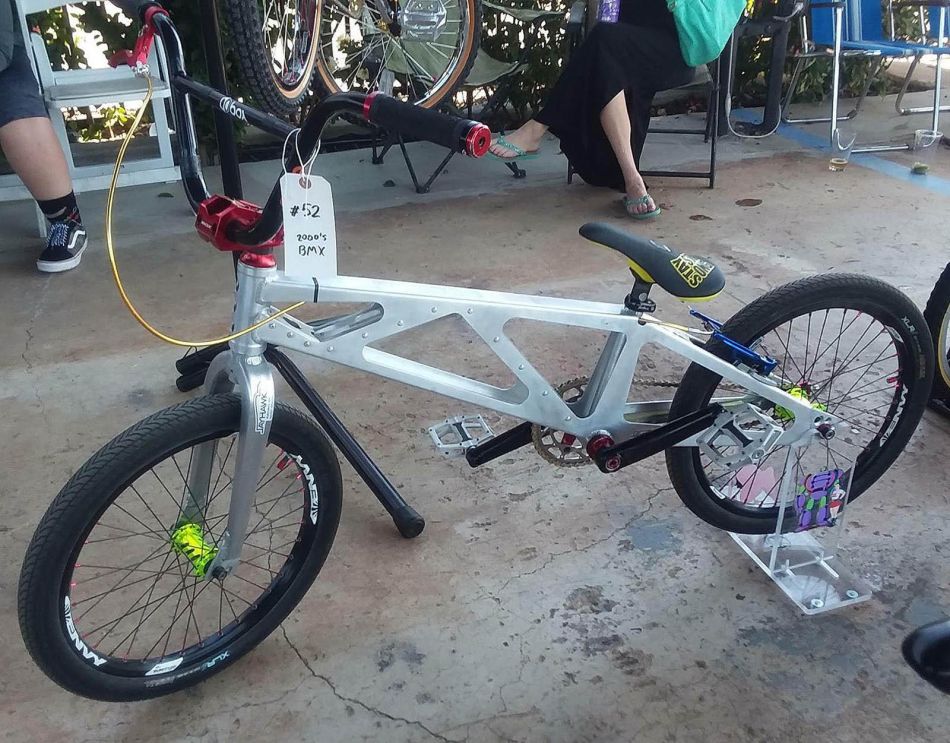 More in this category: « Mike Dominguez on the Rominske Halfpipe! by Aaron Rominske Preserving BMX History. Episode 97: Brian Malmquist (USA) »
back to top